Tommy Fleetwood's 2018 season got off to a flyer as he reeled in Ross Fisher in Abu Dhabi to defend his title plus all the best of the week's action.

So what happened at the Abu Dhabi Championship?

Six birdies on the back nine gave Tommy Fleetwood a successful defence of his title and his fourth win on the European Tour.

Fleetwood dropped only two shots all week and he was spectacular over his closing nine holes as he reeled in Fisher in blustery conditions with a final-round 65. Rory McIlroy, back after a break of 104 days, shared third with another Englishman, Matt Fitzpatrick, while last week’s winner Chris Paisley shared fifth with Thomas Pieters.

Fisher had led by four after seven holes, helped by an eagle at the 2nd, but Fleetwood, who turned just 27 on Friday, drained a pair of lengthy putts at 15 and 16 and then got up and down at the last to finish at 22 under.

That left Fisher needing an eagle to force a play-off but his chip came up short and his meaningless putt slid by. 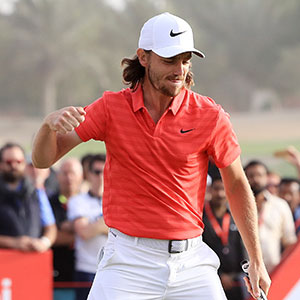 “Tommy shooting six under on that back nine is seriously impressive. For Tommy to defend and in such style against such a great field, it bodes well not just for him for European golf. I said earlier, he will be a great addition to the Ryder Cup team come late September,” Rory McIlroy

There are all manner of ways to look at Fleetwood’s skills but the startling stat, week after week, is how many greens he manages to find. On day one he didn’t miss one, by the end of the week he finished top of the stats with a staggering 87.5%.

Last year he was even more impressive missing just six greens all week.

Coming into this tournament last year Fleetwood had only won once. Before and after all the troubles and driving yips of 2016 Fleetwood was super consistent but he wasn’t a winner – he has now learnt how to really turn it on when it really matters.

And who knows how much inner confidence this week is going to give him on a week where pretty much all the big European names (and the World No 1) were on show.

“I had had the year of my life by a long, long way on the course. And everything we’ve done, everything we’ve talked about, that month off was to make sure that we kept progressing, kept improving.

“We sort of really wanted to look at the year like, you know, if Justin Rose had shot level par on that back nine on Sunday in The Race to Dubai, then I wouldn’t have had The Race to Dubai. So it was sort of important to look at it that way; that maybe try and prove as if you were hurt and you had not had that whole euphoria of achieving something amazing in your career.”

And he’s back on top of the Race to Dubai, just like old times.