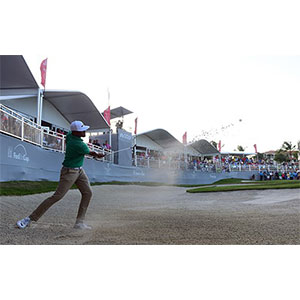 It was a first Tour win for Tony Finau after he beat Steve Marino at the third extra hole.

It was a third straight birdie in the play-off at the par-5 18th after getting up and down from a back bunker while Marino missed from inside five feet.

Earlier Marino had birdied the 18th to tie Finau who then missed from six feet to win the title outright. They then both recorded a pair of fours apiece before Marino’s three putts.

Ian Poulter , who was the first alternate for the Match Play, missed an 18-footer to make the play-off and he finished in a tie for third with Mexico's Rodolfo Cazaubon.

What Finau said: "I think I'm still a little bit overwhelmed. It probably hasn't all sunk in. In regulation, it was a putt that I kind of dreamed of making my whole life.

“It's a putt that you practise for your first PGA Tour victory or just for any PGA Tour victory, so I was a little bit bummed that that sneaked by the hole because I hit a really good putt. But I was happy I had another chance at it and was able to make the second one."