A decade in the making: TaylorMade returns to women’s clubs with Kalea 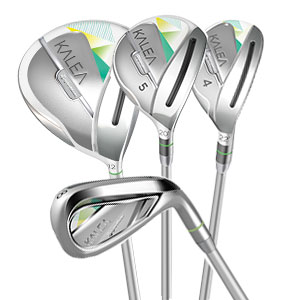 For the past decade TaylorMade has watched from the side lines as its rivals dominate the women’s golf market for all things clubs. However, this week the brand raised the curtain on its latest range, a full line of clubs engineered for female golfers.

TaylorMade has of course made women’s versions of its mainline men’s clubs through the years, but for the longest time female golfers haven’t been able to choose a club specially designed for them right out of the gate. And for those who are wondering, the last time TaylorMade created a club exclusively for women was way back in 2005 – when it debuted an updated version of its Miscela line.

This week, though, sees TaylorMade coming back to the women’s market with Kalea; a set of woods, irons and putter which looked and feel absolutely brilliant.

With most of the focus around design, TaylorMade has produced higher trajectories and more distinct yardage gaps through the bag for slower golf swing speeds.

Key technologies can be found throughout the Kalea range, with it largely based around game-improvement. The woods and irons feature sole slots to help launch with more face flex and higher trajectories. A thinner diameter shaft tip creates higher launch.

”Designing the perfect set for women requires full understanding of the launch conditions they produce and visual cues they prefer. In Kalea we have created a unique product designed to optimize distance, trajectory and playability with a modern,” said Tomo Bystedt, Director Product Creation – of Irons at TaylorMade.


The Kalea range is available from 4th December 2015.