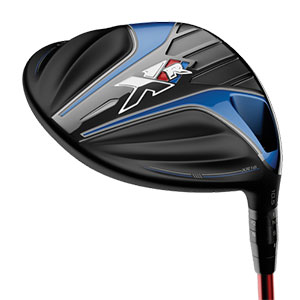 When Callaway Golf wanted fast it went to the only people who could supply the level required: Boeing. Working alongside one another, the Callaway XR 16 Driver, Fairway Wood and Pro was born.

The XR 16 Driver is the most aerodynamic model ever produced by Callaway. Featuring a wave of fresh new tech design to help every golfer achieve the very best performances, gaining power and precision right through the clubhead is of optimal levels.


The Influence of Boeing

Callaway worked closely with Boeing and the results have yielded a very different clubhead design to last year’s popular XR Driver. The head is longer and shallower, with ridges along the bottom to improve airflow at the back of the club and a redesigned Speed Step on the crown to yield better airflow over the top of it. This resulted in 30% less drag from the crown and 10% less drag from the face; 2mph more head speed than the XR could achieve.

Compared to last year’s XR, the 16 has a larger shape for more inertia, a stretched-out crown with a bigger footprint and a centre of gravity that is lower and deeper. The body has been made from lower-density titanium that’s lighter than the old model, which means it now weighs 310g – much easier to swing faster! Callaway’s OptiFit hosel offers a total of eight possible loft and lie combinations.

Callaway uses RMOTO face (which means ribs for motion control) and it works by hidden ribs to connect the face, sole, face and crown to improve golf ball speeds – particularly on shots hit off-centre. Its design is lighter and thinner than before, and made from a stronger titanium. The result, Callaway says, is more speed. Yep, even more still.

The Pro version benefits from aero tech, too, but it has a 450cc head and a more neutral centre of gravity location. Callaway says it provides the distance and forgiveness of the XR16, in a smaller package better players prefer.

Callaway has combined its highest MOI, a low centre of gravity and its springiest face ever found in a fairway wood together. The company has also added a Forged Hyper Speed Face Cup which is thinner, hotter and has a larger sweet spot.

The Pro version of the XR 16 Fairway gives players all these same benefits but with a slightly smaller head.