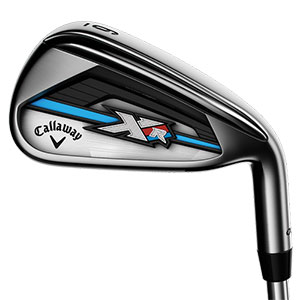 Callaway Golf has a stellar reputation when it comes to producing high-performance, forgiveness-driven irons in its ranges, and the recent release of the new XR OS Irons look to continue that trend in earnest.

Callaway has taken its hugely influential CUP 360 technology and placed it into these irons. Cup 360 technology has helped the company redefine golf ball speeds and helped the brand to become the No.1 iron in golf – and now it’s even faster.

Multi-piece construction and a new heat treatment in the face cup for even more golf ball speed really gives the OS irons a kick, while a soft heat treatment on the body delivers greater feel and performance.

The Callaway XR OS Irons have been created so that they are even easier to hit than ever before, thanks to a lower centre of gravity that’s been placed further back, making it easy for players to get a ball flight that leads to more distance more often.

In order to help players gain maximum distance from their shots, Callaway’s OS Irons include progressive lengths and lofts through the entire set – extending the launch and distance in ever club.

The majority of players looking at the OS Ions will do so because they need greater forgiveness from their irons. The soles are wider and will give far better forgiveness, while it’s also easier to get more distance from any impact location. This gives players confidence in their game, and coupled with the technology, more hits and achieved successfully than ever before.