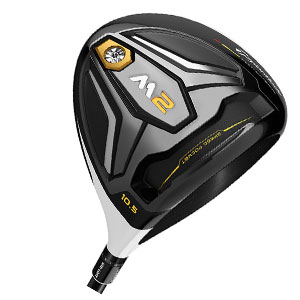 Following the success of M1, the new line of TaylorMade Golf M2 clubs look set to catapult ease of playing into the stratosphere.

The new TaylorMade M2 clubs use the same seven-layer carbon composite crown as the M1, and the driver – with its white and black crown – looks like it could be the M1’s twin brother. However, a few distinct differences manifest between the two ranges, mainly in forgiveness.

The M2 range is all about giving golfers the best chance of success on the greens, making maximum forgiveness all the more important. The weight savings (five grams) from the crown has been located in the sole of the driver, resulting in a low and back centre of gravity (it’s 26% farther back than M1 with the weight placed in the rear position). This assists golf ball speeds and forgiveness. The weight positioning also helps boost MOI for a better performance on off-centre hits.

The M2 driver has retained the popular “Speed Pockets” to give this latest design more face flex than previous versions.

The TaylorMade M2 driver takes full advantage of adjustability, with a 12-position loft sleeve providing a range of four degrees of loft alterations.

A lot of similarities exist between the driver and fairway, with weight savings from using composite in the crown and a revamped speed pocket becoming the calling card of the range. M2 Fairways come in lofts of 15, 16.5, 18, 21 & 24 degrees; the latter two available in right-hand only.

The M2 hybrid does not use carbon composite on the crown, but does have an open-channel speed pocket. Lofts on the hybrid are 19, 22, 25 and 28 degrees (the latter two right-hand only). 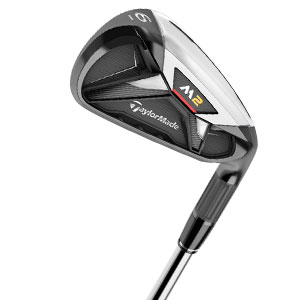 When it comes to the M2 Irons, a whole lot of boxes get ticked. The company has made an iron with ultra-low centre of gravity and as much rebound off the face as is possible. TaylorMade isn’t messing about here; it uses a fantastic blend of past and new technologies which employ speed pockets and inverted cone technology (providing varying thickness in the face to enhance performance across the face). A 360-degree undercut design and fluted hosel beautifully round off the look.

Of course, most golf clubs these days need to be all about forgiveness, and TaylorMade has made it more compact in its irons range.