Distance measuring devices have become one of the fastest-growing categories in golf over the past few years. Whether it be laser-based rangefinders that you ‘point and shoot’, or geo-positional devices that display instant yardages via satellite technology, all types of golfer are using them to enhance their game. They’re even used on tour by players and caddies (mainly during practice rounds).

Deciding which type of distance rangefinder is suitable for your own needs is not an easy question to answer. Ultimately, it comes down to your individual priorities; type of data, features, convenience of use, and ease of use.

The first thing a golfer should know is how far they can hit the golf ball. Knowing how much power is placed behind your swing will make using rangefinders a whole lot easier, and will improve the chances of landing on the greens. As the R&A rightly points out, many golfers believe they hit the golf ball a lot further than they do, and this will be reflected in the distance measurements, so be sure to know your stats before hitting the course. 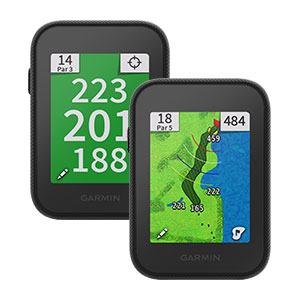 Getting to know range and tilt mechanics

One of the most important aspects of using a distance measuring device is determining the range. If the flag is 300 yards away, for example, then it’s going to be a hard target to lock onto with a steady hand. Where the rangefinder is lightweight in construction, it can prove difficult to hold in place for a prolonged time. Experienced golfers often try to target a large object close to the flag, rather than the flag itself when steadiness is an issue. Using the rangefinder correctly is as important as having a quality model.

A golf flag is a small target, especially on calm days when it remains in a fold. Targeting a large object near the flag with a golf rangefinder is usually the better strategy.

Laser rangefinders have the advantage of offering yardages to the flag position, which many golfers will prefer over the more general ‘middle of the green’ figures offered by GPS.

Once you have registered the standard yardage, the device will then calculate the ‘play-as’ distance by taking the slope angle into account, which will then be clearly displayed on the viewfinder.

While other laser rangefinders will measure the distance on the same level as the flag, Slope Edition models recommend using a golf club that is going to travel the extra yards to compensate for the additional distance indicated by the elevation.

Slope Editions are not formally allowed under the Rules of Golf but are fantastic for casual play, and will gradually teach you to compensate for elevation changes when using a conforming version in competition. 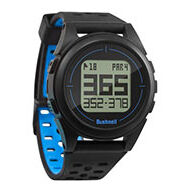 Golf watches were introduced for players who like having stats at their fingertips. Available in several brands, golf watches are close to overtaking handheld GPS devices due to their wearability, wealth of technologies and sleek styles. 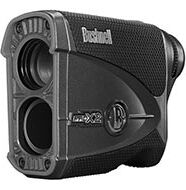 Whether it be laser-based rangefinders that you ‘point and shoot’, or geo-positional devices that display instant yardages via satellite technology, all types of golfers are using them to enhance their game.