And the winner is...New Malden!

On Course Foundation member, Vikrant Gurung, was on hand to congratulate the winners of the On Course Foundation charity raffle this week when they popped in store. They collected their £1,000 prize from their local store, New Malden, which is where The Martin family purchased their winning ticket in December.

The raffle, which was held across all 121 stores in the run up to Christmas, raised £20,000 for the Forces charity. Nick Dougherty, Sky Sports presenter and On Course Foundation Ambassador, drew the winning tickets live on Facebook and received the staggering £20,000 cheque from Regional Area Sales Manager David McGlone. 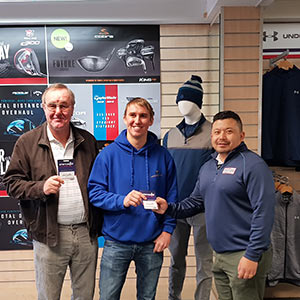 Nick, whose wife Di is also an Ambassador for the charity, has been blown away by the generosity of American golf’s customers, “It’s been great to come here today and hear about how American Golf and its customers support On Course Foundation. It is fantastic to see golfers helping other golfers.

The charity is incredible and this amount of money will make a difference to a lot of people’s lives. Di and I are looking forward to working more closely with them this year.”