Thomas Bjorn's European team won eight of the twelve singles matches on the final day of action in Malaysia.


So what happened at the EurAsia Cup?

It had been Asian dominance over the course of the first two days at the Glenmarie Golf and Country Club in Kuala Lumpur. As the singles began it was all to play for with just a single point separating proceedings, a far cry from the 18½-5½ demolition by Europe in 2016.

Alex Noren got Europe’s cause off to a strong start before Spaniard Rafa Cabrera Bello and Race to Dubai winner Tommy Fleetwood added to the scoreboard.

Asia, though, would reply as Poom Saksansin defeated Paul Casey. 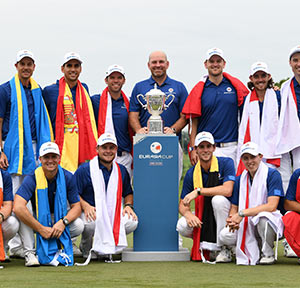 The blue half of the board was then boosted to almost sure victory as Henrik Stenson, Bernd Wiesberger and Alex Levy brought their matches home.

It was down to Thomas Pieters to secure the winning point, after being 4-up Byeong-hun An fought back to bring the match level. The Dane, though, holed a seven-foot putt on the 15th to take a slender advantage before winning the next hole and securing a famous win for Europe.

Asia took the final two games to restore some pride to the scoreline as Li Haotong and Yuta Ikeda defeated Paul Dunne and Ross Fisher.

Ryder Cup captain Thomas Bjorn will have learnt a lot from his sides display this weekend and, hopefully, himself.

Bjorn will lead out Europe once again later this year at Le Golf National with the golfing world watching on as Team USA head to France attempting to retain the trophy.

The Dane received high praise from a number of team members in the build up to the EurAsia Cup and the weekend’s competitive action will only having aided his experience and preparation for the biennial event this September.