Last year was something else for Georgia Hall – a first half of inactivity followed by six months of amazing success. This year she will take on the LPGA Tour.

Amateur golf can be a bit of a guessing game in terms of who has what it takes to turn a supreme teenage talent into a successful career.

I was lucky enough to meet and play with Georgia Hall at a media day at Fulford five years ago. Hall was still 16 but I came away from that round thinking it would be an impossibility that she wouldn’t go on to a) turn pro in the first place, and b) be successful.

None of this is said to crow about an ability to spot a talent, it was just that it was blindingly obvious. It wasn’t just that Hall didn’t have an apparent weakness in any aspect of the game, she excelled in them all as well as, and this was almost even more impressive for a 16-year-old, she was mature, interesting, fun and engaging.

If anyone was socially awkward it was her two playing partners who were both at least 20 years older.

These days Hall is the No. 1 in Europe having walked the Order of Merit by more than €200,000 from Carlota Ciganda. In 10 starts her worst week was a tie for 34th, one of only two times she finished outside the top 15.

At the Women’s British Open Hall tied for 3rd, at the Solheim Cup she was the only player, on either side, to play all five matches.

Otherwise she turned 21 in April, there was a debut at the Evian Championship – and another top 10 – and, to top off a stellar year, Hall came through the LPGA Q School.


You went into 2017 106th in the world, you are now up to 40th. To do that via a limited number of starts on the Ladies European Tour is a particularly remarkable achievement. What were your goals going into the year?

To win the Order of Merit, playing in the Solheim Cup was a big one, to win on the LET, to do well at the majors and to finish inside the top 40 in the world. So I managed all of them apart from the win.


What about this year’s?

I’d really like to win the LPGA Rookie of the Year and, if I can, get a couple of wins and maybe one in Europe. I’ll play maybe three or four times on the LET so will be focusing on the LPGA.

I’d also like to get inside the top 20 in the world.


Does that mean a move to the States?

No, I’ll be staying in Bournemouth and going in bursts of a few weeks at a time and then coming back. I don’t want to live in America, it’s just personal preference, I love England too much. 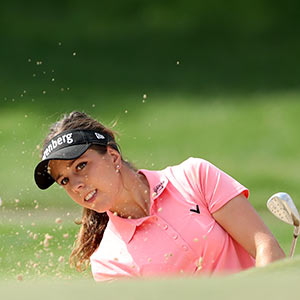 What were the standout highlights in 2017?

The Solheim Cup definitely and coming 3rd at the British Open. I hadn’t played Kingsbarns before but it’s now my favourite course.

I’ve now played in five Opens, the first two as an amateur (Hall tied with Lydia Ko as the low amateur at St Andrews in 2013) and three as a pro. Growing up, to play in the British Open was the dream. I love links golf and I hit it quite low so it suits my game.

I was off in the last group out on the Saturday with the eventual winner IK Kim. I somehow four-putted the 17th (usually the 18th) and never got close again. That green was the hardest all week, it’s a shame it didn’t play as the last as normal as the 18th that week (usually the 1st) was quite easy.


How has your game come on in the past 12 months?

All round it’s been good. My putting has improved quite a bit but can still get better and I’ve added about 10 yards but, again, I think I can get longer and I’ve got a lot straighter.

And I’ve been hitting my irons closer and more down the flag so that has been another big plus.

I’ve been more calm and I’ve been better at forgetting about the bad shots and keeping on trying. I spoke to Gary Player in the middle of the year at his event at Wentworth and he was very inspirational, he said to never give up and never feel sorry for yourself. He had an unbelievable energy.


How special was it to receive the players’ player award in Dubai?

That was a big thing, I didn’t know it actually existed until I got to Dubai so that was so nice of the players to vote for me and recognise what I’d done.

The second half of the year was a lot better and I think 2018 will be a good year. There’s not much you can do as a player and it’s out of your hands.


How did you stay sharp having played so little in the first half of the year?

I basically had two months off in April and May where I just practised at home – thankfully the weather was pretty good – and then played the PGA Championship which began a run of four or five weeks in a row and that got me into some good form.


And then you’re making your Solheim debut. Was it as nerve-wracking as you had envisaged?

I was more relaxed than I thought I would be. On the 1st tee I was nervous but I was quite chilled the rest of the time and it was definitely the best week of the year. When Annika [Sorenstam] was named captain I definitely wanted to be on the team as I thought it would be her first and last as skipper. She gave speeches every night and was such a great captain.


When did you get a sense that you might play in all five matches?

On the Friday night. Charley was injured, there were some other injury niggles and one or two weren’t playing that great so Annika said if I was up for playing all five then I could. And I wanted to do whatever was best for the team.


You and Anna Nordqvist won both your foursomes. Was it a relief to get your first win on the board in the opening matches?

I didn’t really think about that too much, I was just trying not to let Anna down.

She was incredible and we got on really well. Paula Creamer was holing putts from everywhere which we were expecting and we managed to hole a couple at the end to beat her and Austin Ernst.


Your singles with Paula looked to be quite a competitive affair, to say the least. What is she like to play against?

A bit intimidating, or she tries to be, but I didn’t really let it affect me. She is a lovely person off the course and we’ve played a lot of practice rounds together. I like Paula but she is a strong match player and wants to score a point for her team.


There were quite a few short putts that weren’t conceded?

Yes, I saw a bit of a different side to her in the singles. Not a bad one, but you could see how much she wanted to win, and it was a great match (Creamer won at the last).

I didn’t take it too seriously, she was getting the crowd going and her and Cristie Kerr were doing that the most.


Which American were you most impressed by?

Cristie. She holed everything. She doesn’t even look like she likes the putt but they all just go in. She was amazing. Catriona [Matthew] and I were 14 under after 16 holes and still lost, she was just incredible.


And finally, two lots of Q School to end the year?

I topped the scoring at Second Stage and then opened with a 77 at the Final. I don’t know what happened, the ball wasn’t stopping so I would try and land it on the front but it would still run on and I was a bit shocked by that. But I told myself to keep going and played well the rest of the week.


How strange is the whole experience of Q School?

It determines your whole next year but you can’t think about it even though you have to wait all year for it and five rounds is a lot. You’re not trying to win anything, you’re just trying to finish inside the top 20 and give yourself some good starts.

I got a bit nervous the last couple of holes but I shouldn’t have been as I was well inside it and I was fine in the end (Hall tied for 7th).

It was an amazing 12 months but I’m trying to forget about it now as this year is really important – but it was definitely my best season so far.