Derailed by injury at last year's Masters, Dustin Johnson is now planning to get his own back.

Dustin Johnson’s overall Augusta record is surprisingly mixed. Like Rory McIlroy, he would appear to have all the tools to contend every year but that’s not quite the way it’s worked until now.

If you were being kind, you would look at the consecutive top sixes on his two most recent performances and the sheer amount of red numbers on his scorecards. Johnson clearly has the capability to go low at Augusta.

If you were still unconvinced, you would worry about the inconsistency that, to date, characterises his Masters showings. As he acknowledges himself in this interview, it is all too easy to rack up a quick double at Augusta.

If he is to slip into the Green Jacket – this year or any other – the key will be as much avoiding costly mistakes as it will his ability to dominate the par 5s.


How much did missing last year’s Masters leave a hole in your season, not just physically with the injury but in terms of missing the opening major?

Absolutely, it derailed me a little bit.

Just in the fact that I was playing the best golf of my career leading up to it. I had just won three events in a row, I was heading into Augusta playing very, very well and I had a lot of confidence. I get injured, I can’t play and then obviously I can’t practise properly for about three weeks.

Then I go straight back into playing because I’ve missed some time so, yes, it kind of just derailed the whole season.

Then when I come back I’m not swinging as good as I was before, the body doesn’t feel as good as it did so now I’m sort of compromising with the golf as far as I’ve just got to play with what I’ve got.

So, it definitely derailed the season a little bit, but I got it back with a nice win at the Northern Trust in August.

Your game appears ideally suited to Augusta. What have you learned over the years about how to play Augusta and what demands it makes?

Obviously the two previous years before 2017 I had my two best finishes. From the first time I ever went there I loved the golf course. It’s set up well for me. I think it’s a golf course I can do really well at. So I was really looking forward to going into it last year playing as good as I was.


Can you identify the three holes that make the biggest different to you in compiling a great round at Augusta? What are the key shots for you on these holes and why?

Really, every hole out there is a hole where you can’t ever lose focus. Any hole can bite you if you aren’t focused. The fact is that the golf course is difficult and if you get out of position you can make a number on pretty much every hole.

But then you turn, and you have 4, 5, 6 and 7 which are difficult. For me, though, I’d say every hole is pivotal out there, you’ve really got to stay focused and stick to your game plan.

Making birdies and eagles here clearly isn’t an issue for you – in the second round in 2015 you had three eagles. But how do you balance the chances to make eagles at Augusta and surge up the leaderboard with the risk of bringing bogeys and worse into play?

Well, the par 5s at Augusta are where you’ve really got to make your moves. I mean, they’re important because those are the holes you can definitely score on.

For me – depending on the wind – I can reach all four of them so playing them smart is key. If you make four fours on the par 5s every day you are doing good. Those are the holes where you really have to attack the course.


You were level with Danny Willett through three rounds in 2016 and he went on to win. Is that one that got away?

I definitely had a chance coming up 17. I drove it in the fairway, and I thought I’d hit a great shot from the fairway and it ended up catching the tip lip of the bunker and I ended up making a double. In the air, I thought I had made a birdie so that was a big turning point.

But, yes, that was one where I was right there, and I had a really good chance. 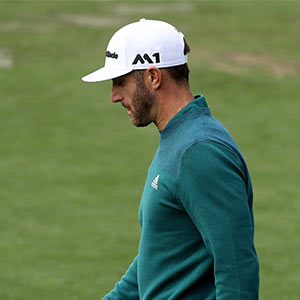 Given how many wedges and short irons you hit, can you explain the process of improving that side of your game?

So I got myself a Trackman first of all and I have different shots with each wedge. I’ve got three shots with every wedge, so I just worked on that and got to the stage where I was good at that.

So if I’m laying up on a par 5 or on par 4s I’m trying to get my ball to where I have that number into the flag and that’s where I’ve really improved because now I feel like if I have one of my numbers, which there is a lot of them, I can generally get myself into the position where I can hit one of my wedge shots confidently knowing I’m going to hit it close and give myself good birdie opportunities.


Can you win at Augusta playing predominantly with a fade?

The only hole I hit a draw on there is on number 10 really and I can fade it off every other tee box.

Looking at your Masters record, you seem to have taken a little while to come to terms with Augusta. How important is familiarity with your surroundings here and how does it help?

I really don’t know. Like I was saying, from the first time I ever played it which would have been in 2008 I just loved it. But the golf course, especially during the Masters, they always figure out a way to make it really tough.

I’ve had good rounds, but it always seems like there’s one round that has thrown me off in the years past. But I feel like now I’m really comfortable there and I’ve got a good game plan for the course which has shown over the last couple of times I’ve played there.


The rule above does not appear to count for Jordan Spieth. Is he just smarter than everyone else?

I think putting is a big part at Augusta and he’s obviously a great putter so that’s why I think he’s done well there.