What happened at the Belgian Knockout?

The Spaniard played the nine-hole final in three-under-par to get the better of the Frenchman who could only manage one-under.

The triumph completed what has been an impressive run of form for Otaegui, who finished runner-up to Alexander Bjork in China last time out, and hasn’t finished outside of the top-20 in his last five starts.

After finishing eighth in the opening 36 holes of strokeplay, Otaegui breezed past Erik Van Rooyen, Maximilian Kieffer and Matthew Southgate to progress to the final day, and then defeated Jorge Campillo and David Drysdale to set up the finale against Hebert. 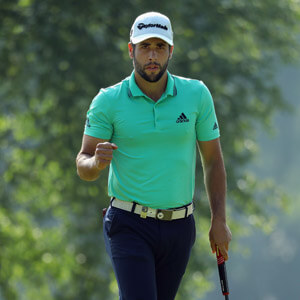 It was a cagey opening as both players made bogeys at the first, but Hebert took the lead on the second with a birdie. The turning point would prove to be the fourth hole, however, as the Spaniard skirted the water hazard with a tee-shot that sailed right, but hit his approach to tap-in distance for a birdie to draw level.

Otaegui then pulled away with three consecutive birdies from six to eight. Stepping on the final tee, he had a comfortable two-shot lead and Hebert was unable to cut the deficit.

In the third-place playoff match, Scotland’s David Drysdale edged out England’s James Heath. It was a big match for both players, but it was particularly pertinent for Heath, who now qualifies for next week’s BMW PGA Championship at Wentworth. Prior to this week, he’s missed seven cuts in eight events, with a best finish of T72 in Morocco.

Otaegui is now proving to be a bit of a matchplay specialist. Matthew Southgate gave him the biggest test on Saturday, but other than that, it proved to be fairly comfortable for the Spaniard.

Of course, the format this week at the Belgian Knockout wasn’t strictly matchplay – instead, it was a mixture between both matchplay and strokeplay with knockout matches and the usual strokeplay scoring.

With Otaegui’s first victory coming at the Paul Lawrie Match Play last year, it certainly seems that he’s a lot more comfortable playing formats that differ from the usual 72 holes of strokeplay.

Another birdie putt and Otaegui leads by two with one left.https://t.co/Sj1bUWNiL6 pic.twitter.com/aicBvTvAdo