Chris Paisley's last win was on the Challenge Tour in 2012 but that didn't stop him firing a closing 66 to capture the South African Open.


So what happened at the SA Open?

Everyone expected this to be Branden Grace’s day. On home soil, eight wins on the European Tour and five birdies in his last eight holes coming into the Sunday at Glendower.

Chris Paisley led by one but his last win was on the Challenge Tour in 2012 and his caddie was a first-timer on the bag and was someone, in the player’s words, ‘doesn’t know much about golf’.

But with his wife Keri on the bag the Englishman not only withstood Grace’s birdie-eagle start he put together a bogey-free 66 to win by three, his first victory on the European Tour at the age of 31. 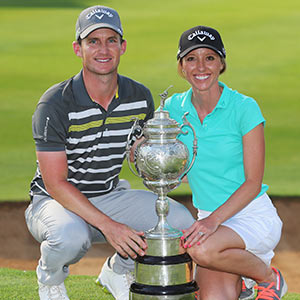 “I still can’t believe it. Going head-to-head against Branden, in his home country with pretty much everyone in the crowd on his side was tough but I just played great. I played out of my skin. I didn’t even think I was capable of playing that well to be honest, and to come out on top in such a wonderful place is amazing,” explained Paisley.

Paisley holed a 30-footer at the 4th to share the lead again and was two clear after a Grace double two holes later. After 10 holes he was four clear and, while Grace stiffed his approach at the 16th, Paisley parred in to get over the line and deny Grace the chance to win South Africa’s three most prestigious events.

South African JC Ritchie was third after a second successive 65 that included two eagles and six birdies. Chase Koepka, brother of Brooks and a Challenge Tour graduate, finished in a tie for seventh.

“My regular caddie is getting some stick but I just can’t say enough about how good of a job she has done this week and just in life in general. She doesn’t know that much about golf but she knows me really well and she knows when I’m going a little quicker than I usually do or when I’m getting a bit tight,” Chris Paisley