Last year was one to forget for the Ladies European Tour. We spoke to their executive chairman Mark Lichtenhein on how he plans to get the tour back on track.

When the Ladies European Tour makes the headlines you can safely assume, given the general lack of interest in the women’s game, that it’s not overly good news.

On June 30 a headline in The Times screamed “Women’s golf tour on ‘brink of collapse’” which, given the facts, didn’t seem to be too hysterical. At that point five tournaments had been cancelled and there had been a release of some ‘worrying financial figures’. By the time the tour’s CEO Ivan Khodabakhsh – who was on gardening leave for the Scottish and British Opens – had left his position on August 9 another two tournaments had been scrapped.

Nine days later the Solheim Cup began and, thrust front and centre at Des Moines, was Mark Lichtenhein who remains in temporary charge of the tour.

Lichtenhein had previously worked for the European Tour for 16 years during which time he was pivotal in delivering their global television product, including the Ryder Cup, to all their international markets. We caught up with him at the BIGGA Turf Management Exhibition in Harrogate at the announcement that the LET had extended their partner agreement with John Deere as the tour’s official supplier of golf course maintenance.


What is your actual position now?

There were a number of things that we wanted to do before making any long-term decisions. When I started as chairman I pinpointed that our governance structure wasn’t up to date, and I thought it was a good opportunity for us to get some stronger governance in place so, going forward, we don’t end up in a similar situation. It’s a work in progress and we’ve commissioned an independent report into our governance structure.


So, you’re not actively looking for a CEO?

Not at the moment simply because we want to get the governance structure around that role right before making any appointments.

In the current structure the chief executive is part of the board which, for this kind of organisation, is not the right structure. You need clear separation between the governance and the management.

But effectively I’m running that position day to day and assuming those responsibilities.


Would you want to do it?

I’d love to do it if the board wanted me to do it. 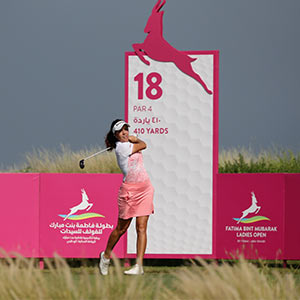 Where is the LET up to in terms of working with the LPGA or men’s European Tour?

When we spoke to the LPGA and the European Tour at the end of last year we were still trying to put a number of things into place for this year and we really didn’t want to disrupt that process by getting into the legalities of structure and ownership.

So we agreed we would take the next six months from then to work on the 2018 schedule and review where we were in the spring and see what kind of help, if any, that we needed.

I speak regularly to the LPGA commissioner Mike Whan – we obviously have a relationship with the Solheim and the Scottish Open and it’s not like it’s a third-party merger and acquisition – but things have been going well with the LET.

We have got the first part of the schedule announced with four weeks in Australia coming up, with opportunities to qualify for the Australian Open, and it will then be South Africa and Morocco. At some point in February we’ll then be announcing the rest of the year, we’re just tweaking some of the dates.


How many tournaments would you like to see played this year?

Our target is to get back to 20 and we’re on track for that. There is just some juggling of dates, we will be announcing hopefully a couple of new tournaments and some improved terms for existing ones.


I spoke with one LET player last year and she said the tour had become more of a secondary income given the lack of tournaments. How depressing is that for you?

Clearly that is not where we want to be, and we want to get back to around 30 tournaments in the next five years, so the players can make a respectable living playing on the LET.

The prize money won’t be on a level with the LPGA but we want to be able to offer a viable alternative, so they don’t feel like they have to go to America. We will always congratulate the girls who do play in the States, but we would always welcome them back to Europe and hope that they would support events like their national Opens.


In an interview we did with Mel Reid a year ago I asked, if she were in charge of the LET for a day, what would she change. She said to make physio free like the other tours, to not make the welcome dinners mandatory the night before a tournament and better conditioned courses?

Well our partnership with John Deere will certainly help with the condition of the courses and they will bring so much experience to an already experienced team.

The girls are fantastic in supporting events and they are super engaged with everything that we do. I’m not sure we would need to make them mandatory as 90 per cent of girls would come anyway but I would like them to want to come rather than feel like they have to.

As for the physio, absolutely and we are working towards making that free and we’ve been discussing that at board level. It may not happen this year but is certainly one for the future.


Will we be seeing any different formats?

Absolutely, we have got several different conversations going with the European Tour. We have got the European Championships at Gleneagles this year, which we will be working together on in the mixed event.

There are various scenarios with the European, Challenge and Senior Tours of having some sort of combined tournaments in various different geographies and not just in Europe.

The gender imbalance is this country is quite acute, we have one of the lowest participation levels for women in golf in any European country which obviously isn’t a good position to be in but it does offer a good opportunity to grow the game. The whole tailwind we have behind women’s sport right now is phenomenal.


Historically the TV coverage of the LET has been poor so what is the best way to go about getting more coverage?

The whole digital revolution is really helping us. At next week’s Vic Open there is a full digital production and we will distribute that to our broadcast clients. What we can’t do, and every women’s sport has this challenge, is to try and compete with the men’s air time. Men’s sport is so dominant in terms of coverage.

One of the things we did well at the back end of last year was to have the LET on the Sky Sports mix channel. We want to reach another demographic other than middle-aged men and having the mix channel gave us some pretty good viewing figures.

I will talk to girls and ask if they saw something on the LET and they will have seen it on Instagram or YouTube. That is a good thing for us as there are now more channels available. The stunt we did at Yas Marina Circuit in Abu Dhabi got 1.1m views on Carly Booth’s Instagram.

Highlights programmes will always be important, but we want to have more free-to-air coverage and not just on subscription channels.

I sat down with the ICC and UEFA and discussed women’s sport and they have the same concerns, the media value is not going to drive our respective sports. We need to have different content and we need to be speaking to different sponsors to show, yes, it’s sport and it’s competitive but it’s different. It is going to be challenging but digital media can really help us.


How about getting away from the traditional Thursday/Friday to Sunday running of tournaments?

We had a couple of good experiences of that, particularly in Turkey, but unless all your events are Sunday to Wednesday then you will limit the number of weeks that you can play.

The media side is one part but there is also the footfall and your sponsors to look after. Finishing on a Wednesday evening works well in a tourist-centric destination where every day is a weekend but for more traditional and corporate sponsorships there is a desire to finish on a weekend.


What are the chances of having a tournament back in England soon?

That is absolutely key and that is one of our big. The Bucks event was great, and it is home to the LET. The course has been recently renovated and is under new ownership, so I think we can work together to make the club a centre of excellence for women’s golf.

Again, it comes down to the types of sponsors you are talking to – you are seeing a lot now in women’s sport with corporates who are very focused on social responsibility rather than a consumer brand which is based on media value. With the best will in the world we can’t compete with the men in terms of media value and nearly all the sponsorship money goes there.

You saw our event in Abu Dhabi which made a great statement about women. The tournament is called the Fatima Bint Mubarak Ladies Open and there is a ladies’ sports academy in her name and the tournament has a different tone. We’re not on the same course as the men, we have different branding and hopefully it will encourage girls there to play golf.

One of cautious optimism. We had a good player meeting and AGM at the end of last year and they understand the challenges and what we are trying to do. We are trying to get to a sustainable growth pattern and build something solid for the future. Television is a part of it but it’s not the solution to what we are going to do.

We are seeing a changing pattern in the television landscape and we can be at the forefront of that as we’re not wedded to long-term TV arrangements.


How would you sum up your last six months?

There is a lot of work to be done but the first thing we had to do was to stabilise the tour and make sure the tournaments that were scheduled happened which they did.

And then rebuild some of the relationships that have been lost. There is a lot to do particularly in Scandinavia which is where we seem to be struggling and I’ve not yet got to the bottom of this. Half the field at Q School was from northern Europe and Norway was one of the biggest represented countries so we need to build the confidence back there.