We had to wait until 2014 to have our first Irish Ryder Cup captain. Padraig Harrington would like to be the third in four matches at Whistling Straits.

The Ryder Cup captaincy is an odd thing. We all have our preconceived ideas about things and how well we think we know a player.

When Tom Watson was announced I and most others thought that this would somehow guarantee an American win which was only added to when Paul McGinley was named Europe’s head honcho the following month.

He’ll get spooked by Watson, we thought, the Scottish galleries might even pull for the Americans because of who was leading them, we thought, and, for some bizarre reason, McGinley’s lack of top-level experience might count against him (and us), we thought.

And then Gleneagles happened, and McGinley emerged as possibly Europe’s best ever captain, having pieced together a quite brilliant plan, while Watson was turned on by one of his brightest stars.

How wrong we all were.

Every two years we trot out the old argument that you’re a great captain if you win and a terrible one if you don’t blah blah blah, but you’d like to think, for a variety of reasons, that Padraig Harrington will be a spectacular leader if/when he gets the nod in 2020.

The Dubliner was speaking at the Open media day at Carnoustie, via a conference call from New Orleans, where he was playing alongside Shane Lowry. Six times a player and a vice-captain the past two matches Harrington has had a meaty Ryder Cup career ahead of a possible captaincy.

Adare Manor in Ireland have put their hand up for 2026 but that would be too late for Harrington, now 46.

“It’s too late. Too late for me to wait for that. It would be too much of a risk. I would be somewhat out of touch with players by 2026, and there will be a lot of good players coming on the scene by 2026, good players who are playing now who would be looking for the captaincy, which would mean, if you’ve got five, six guys in, it’s creating a risk you’ll never get the job,” Harrington said.

“As much as I’d like to be the captain in Ireland, I think the risk outweighs the reward of waiting.”

Harrington is honest enough to admit that his game is unlikely to threaten a seventh playing opportunity and, with Lee Westwood, Luke Donald, Ian Poulter, Henrik Stenson, Justin Rose and Sergio Garcia waiting in the wings, then the Irishman is keen to give it a whirl at Whistling Straits in two years.

“I’d love to be a Ryder cup captain down the road. Putting my name in the ring to be Ryder Cup captain is coming sooner rather than later, with my form. I don’t look like I’m going to be playing my way into any team too soon. 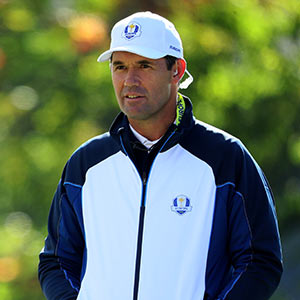 “It would be good timing for me. I’m kind of finished here in the States next year. I’ve got All-Time Money winner on the US tour next year, and the year 2020 I’d probably be back playing in Europe which, if you were a Ryder Cup captain, you would need to be – there’s a lot of official duties. You need to play a lot of European Tour events.”

Harrington once said that he believes that journalists get a bit of a hard time and therefore he tries his hardest with every answer. In the course of the 30-minute call last week there were 5,000 words of quotes to go at on a variety of topics.

Nick Faldo came to Wentworth a few years ago ahead of his captaincy at Valhalla and it was a car crash from start to finish with Faldo being over prickly from the onset due to years of a poor relationship with the press.

This would be pretty much an impossibility with Harrington. The Association of Golf Writers began the Arnold Palmer Open Award for the person who has made particular efforts to assist the AGW in its endeavours to provide media coverage – Harrington was the inaugural winner in 2013.

Interestingly he was followed by Poulter, McGinley, Colin Montgomerie and Rose.

Furthermore, his playing credentials are beyond any doubt – it would almost be unthinkable for a three-time major winner not to get the nod – he’s about as astute as anyone in the game, he’ll say what he thinks rather than what you might want to hear, and he’ll likely handle the additional pressures of being an overseas captain with skill and poise.

I personally find him fascinating. Whenever the Open Championship press conferences are released I’ll look for Harrington’s name first and then Jordan Spieth’s. By the end of those two you should have a pretty good grasp of what to expect over the coming week.

At Lytham in 2012 I listened to Harrington explain how he saw the 18th hole.

Roll the clock forward a few days and the chasing Ernie Els birdied 18 while the backtracking Adam Scott bogeyed.

I have been lucky enough to play with Harrington in a pro-am and he was spectacular company. During the walks to three tee shots he gave me enough content for a 1500-word feature while also attempting to solve my chipping, another person’s slice and the other member’s bunker play.

A very clear memory from that day in Abu Dhabi is him struggling a bit with his game but getting up and down from four pieces of sand with some ease. He then stayed around for lunch before retiring to the range to work for another three hours on his driving.

Harrington is some individual. If you cast your mind back to his Walker Cup days, then you wouldn’t necessarily have thought that he had the game to cut it on the European Tour let alone the world stage.

His professional wins now stand on 31.

But it’s the person who impresses even more and continues to do so. Once Thomas Bjorn has had his go in France we’ll very quickly turn our attentions to who’s next and, all being well, the Dublin man will take his rightful place at the Ryder Cup top table.