Another win for the Ping G400 driver but which version does Bubba favour?

When Bubba Watson won at Riviera in 2014, he went on to win the Masters.

Could he make it a hat-trick of green jackets in 2018? Some bookies have slashed his odds to 25/1 but some aren’t concerned and are still offering around 50’s.

His third win at Riviera comes almost two years to the day after his last PGA Tour victory at the same California venue.

Bubba is a loyal Ping staffer and has now enjoyed 10 PGA Tour wins with the brand’s clubs.

His next club with a headcover is a 19˚ Ping G hybrid.

We have seen Bubba playing the iBlade irons but he’s still using the S55 model – which he won his second green jacket with – with the exception of an iBlade 2-iron.

He has three Ping Glide 2.0 wedges and uses a Ping Anser putter.

Bubba switched to a Volvik ball last year where we saw him using both pink and green models but has now gone back to the Titleist Pro V1x which he won his two majors with.

The win has catapulted the American from 117th to 40th in the Official World Golf Ranking. 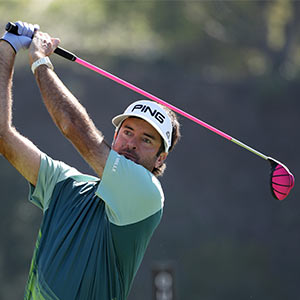