Haotong Li showed nerves of steel as he held off Rory McIlroy during the closing stages to win the Omega Dubai Desert Classic.

And he relied on last year’s TaylorMade M2 driver to reach a record-breaking score of 23 under par.

The Chinese star has now moved into the world’s top 50 – the first man from his country to do so. 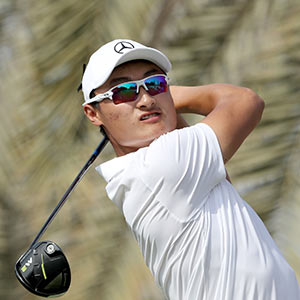 We also saw him using a new Callaway Rogue fairway wood and Callaway Epic hybrid on his way to victory at Emirates Golf Club in Dubai.

He uses the sleek TaylorMade P750 irons through the set.

Li signed a deal to play a Bettinardi putter this year and favours the Custom Studio Stock 3 Tour model.