Check out the Callaway gear the five-time major champion used to land his first win since the 2013 Open at Muirfield.

Phil Mickelson WITB. We’ve been waiting to write that since the Open at Muirfield in 2013. Unbelievable.

And the five-time major winner got his first win in nearly five years with a load of brand new Callaway gear in the bag.

He also uses a Rogue hybrid before going into an Epic Pro 4-iron which we’ve seen Mickelson using for a good six months or so.

Mickelson had used the 2013 X Forged irons but has recently switched to the 2018 X Forged models.

And it’s no surprise to see him use three Callaway Mack Daddy wedges in the PM Grind which have an accentuated toe to allow him to open the face and play his trademark flop shots.

His putter is the trusty Versa #9 and he plays the brand-new Callaway Chrome Soft X golf ball.

“It’s nice to be back in that small circle they call the winner’s circle,” an emotional Mickelson said after his play-off victory over Justin Thomas.

“I felt like my game had been too good not to be winning soon.” 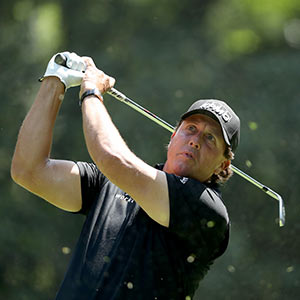