A great start to 2018 for the world number one and his new 'Twist Face' driver.

World number one Dustin Johnson got 2018 off to the perfect start, using the new TaylorMade M4 driver to devastating effect in Hawaii.

We had expected DJ to put the new M3 driver into play but as previously reported, the M4 at 9.5˚ was preferred to a 10.5˚ M3 due to the windy conditions at Kapalua.

Johnson had used the adjustable M1 throughout 2017 and liked to deploy one of the moveable weights in the toe to help him hit his trademark high fade.

But he did tell us the miss he feared was with one struck out of the toe which went left.

Bot the new M3 and M4 drivers have something TaylorMade call ‘Twist Face’ technology which helps reduce the impact of heel and toe strikes.

And it was a driving masterclass throughout the week for Johnson who nearly made an ace on the 433-yard par-4 12th.

His strokes gained off the tee during his final round of 65 was +4.09 – the best ever recorded in a round at Kapula.

There was also a new M4 fairway wood in the bag. 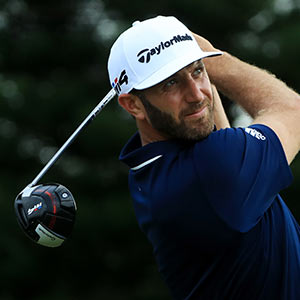 Johnson uses the P730 ‘DJ Proto’ irons – pretty much the same ones Rory McIlroy and Justin Rose have in the bag.

But we have a new driving iron in the shape of a P790 3-iron – DJ had previously used a TP UDi long iron.

And another new club since his last victory is a 64˚ ‘Hi-Toe’ lob wedge to go alongside is other two Milled Grind wedges.