We’ve all got lots of queries around the new World Handicap System and how it will work. Steve Carroll put some of the questions to Gemma Hunter, CONGU board member and England Golf’s handicap and course rating manager.

The new World Handicap System, set to be introduced in 2020, caused quite a stir when the principles were announced last week by the R&A and USGA.

The adoption of slope and the USGA course rating system, moving to a calculation of handicaps based on averages and allowing recreational rounds to count – it all seemed to be a massive change from the CONGU system we’ve all been used to.

Since that announcement, social media has been awash with golfers trying to work out how the new scheme will work in practice.

It’s important to say a lot of the detail hasn’t yet been finalised, and it’s hard to estimate handicaps without knowing the USGA course ratings for individual layouts as well as the slope.

But we asked Gemma Hunter, a CONGU board member and England Golf’s handicap and course rating manager, what she could tell us about the World Handicap System and how it might affect us in our day-to-day golf.

The outline principles of the World Handicap System have been revealed. For those of us used to CONGU, this is going to be quite a big change isn’t it? People will think there’s a big change but, when you look at the components of the system, there is a lot that is very similar.

There are some things that will be fundamentally different – like going from a .1 and aggregate system to an averaging system. That’s the biggest change, along with the incorporation of slope.

Everything else is something that we have seen or used before.

Other key things, such as what types of competition you can use for handicap purposes, is not going to change dramatically.

People get a bit excited that it is going to make a massive difference and, personally, I don’t think it will.

CONGU is playing a really central role in helping develop this system and helping make sure that it stays relevant for our golfers. People think CONGU is not going to have anything to do with it but, actually, that’s not the case.

The average-based calculation of handicaps will be taken from the best eight of the last 20 scores. Why eight?

They (R&A and USGA) have looked at the systems that are currently in place at the moment – Golf Australia and the USGA are the prime two for using this. Golf Australia use eight, the USGA use 10.

They include additional calculations but, when you strip them back, using eight of 20 give you the most responsive index, which will improve equity.

So they have done work looking at the systems and have said ‘actually, if we take the average of 10 and the average of eight, which one gives us the most accurate figure?’

Eight gave that without the need to add anything else into it.

It’s going back to that idea of trying to keep it simple. A straight half – 10 out of 20 – would have been easier for people to get their heads around but the numbers didn’t quite match up. Eight was deemed to be the way forward.

That calculation will also factor in “memory of demonstrated ability for better responsiveness and control”. What does that mean? Does it remember good scores from the past, or stop you going up in a period of bad form?

We haven’t actually nailed this down yet – it hasn’t been finalised. It’s the idea of taking the scores that might have dropped out of your last 20 and the system remembering what happened.

There are still discussions and trying to work out the best way to build this into the system.

Until we actually know what it is going to look like, it’s very difficult to say ‘this is exactly what it will do’. There will be memory and that’s really key.

Should this also stop a ‘bandit’ putting in 20 bad scores over a short period to get a big increase – using recreational rounds as part of that – because the system will remember what that player has done in the past?

Correct. Within it, there will be an anchor to stop the handicap rising too quickly – this is part of the detail that is still being finalised. 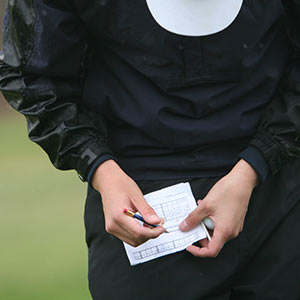 It will also protect players who are having a bad run from going up massively?

Yes. Otherwise you are in an averaging system and a handicap could bounce quite dramatically. People will still fluctuate but it just won’t be as dramatic.

Recreational rounds may be allowed to count for handicap ability. How will that work in practice?

People have got very excited about this. What people need to understand is that, because CONGU are so heavily involved in this, the scores we choose to accept for handicap purposes is going to be a CONGU decision.

Over the next two to three months, we will be having those discussions to say what we believe to be acceptable. Our current view is that we do this a little bit at a time. We’re not going to change everything on day one. Initially, we hope that it will be no different than where we are today.

It will be any singles competition – par, medal, Stableford – played on your own, with your own ball, that will be mandatory.

Social rounds will be singles again and they will be, as we have with the Supplementary Scores, opted into. It’s not a case of submitting a score every time you go out.

It’s a case of you and me deciding we are going to play and we are going to put a card in for our handicap. We sign in to play, to say that’s what happening, we play golf, come in and post our score.

It’s effectively Supplementary Scores under a different name. We’re changing the name because it’s a global system and we need to come into line with everyone else. Fundamentally, we are sticking with what we know now – because we don’t want to scare golfers into going ‘hold on, I don’t want to put recreational scores in. If we can’t go out for a quick 9 holes and just throw balls down because we’re worried about putting a score in, we’re not going to play’.

The whole idea is to encourage people to play golf more often.

It is saying ‘if you are playing in America or Australia and you want to put a card in for your handicap – even though you are not a member at that club – you can do that and this is the way you go about doing it’.

There are procedures that you have to follow but you can do it and you can choose not to do it. It’s up to you.

The key with the world system is that if you put enough scores in, your handicap will be more reflective of your ability.

The more scores you put in, the more often, the more accurate your index reflects your potential ability.

We are seeing that more and more with the rise of flexible memberships within golf clubs – where people want the flexibility to say ‘I’m not really that bothered about competitions anymore, but I want to have a handicap. I don’t want to compete, but I want it to gauge my own improvement, my own performance. I want to be able to say I’m better than my mate’.

It might just be a social group or Facebook group, but they want to be able to say they are better than them.

You can’t do that if you don’t have some form of handicap system. This will allow that to happen.

Yes, you can be a flexible member of a golf club, but you don’t need to play in competitions to be able to maintain a handicap.

You have the opportunity to put in more casual rounds, more social scores and be able to maintain a handicap.

There will be very little difference. The only major difference is that it will have less impact and one player isn’t going to be able to make the jump in the CSS.

At the moment, you can have one player who can make a competition go up or down because of their performance. This is a little bit more conservative. It will only move if there is a real reason for it to move.

So, it is going to be a little bit more stable. There are not going to be as many big jumps and it’s based on the player’s performance.

So, it’s what we expect you as a player to play to, on that day, and then looking at what you did play to and doing the calculation.

Now the calculation hasn’t been finalised, so we know roughly what it is going to look like. It will be very similar to our CSS or the CBA they use in Europe.

So rather than looking collectively at the field, will the system look at us as individuals based on our performance?

It does both. I know there are some individual components to it because it is based on your performance as a player.

Overall, it would be everyone who played on that given day, on that golf course, that would have the same daily rating – or course conditions adjustment as it has been called.

I’ve explained it as basically being CSS but in a slightly different guise that’s a little bit more stable.

England Golf and CONGU are a little bit ahead of other people because we know that we’ve got a lot of education to do to our golfers.

We wanted to start this process as early as possible and that’s why the announcement was made last week.

We’d already spoken to our counties the week before and we’ve already got in place workshops starting in April.

That first session is going to be about trying to answer some of these questions that clubs are having. We are not going to be able to give the detail, because we don’t have it.

This is still growing and developing. We’re still working towards the date of 2020 and that’s the aim. We will continue to do that this year, and, by the end of this year, we need to be starting a formal education process and that’s when we will get into the real detail of the system.

This year is more about information, answering questions and preparing clubs.

Next year is about saying ‘who’s going to be on your handicap committee for the next three years because we need to sit in front of that person’.

It’s getting clubs to realise they can’t change their handicap committee every year because that’s not going to help them.