5 reasons why Darren Clarke was named


As Darren Clarke is named as Europe's Ryder Cup captain for 2016, we look at five reasons why the Northern Irishman got the job. 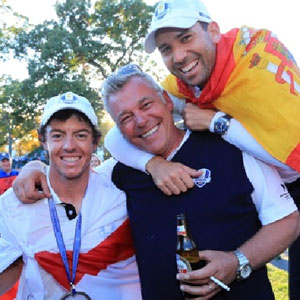 Think back a couple of years and you may remember Paul McGinley being heavily backed as the next captain by a number of influential players.

Obviously players have an idea who they would like to get the job and they may want to share these views. When you have Ian Poulter, Lee Westwood, Graeme McDowell and Rory McIlroy on your side, you've got a strong case.

Maybe the players already have a pretty good idea who is getting the job and want to get in his good books?

Now we're not suggesting that Ian Poulter openly backed Darren Clarke because he thought he may need a captain's pick somewhere down the line but how many players come out and back someone who doesn’t end up getting the job?

I think when you dissect the five-man panel of Colin Montgomerie, Paul McGinley, Jose Maria Olazabal, David Howell and George O’Grady everything pointed towards Clarke.

Prior to Gleneagles in 2014, Clarke gave Monty his backing as captain. Clarke also joined him as a vice-captain at Celtic Manor in 2010. You’d say that took care of Monty’s vote.

Clarke was also a vice-captain to Olazabal in 2012.

David Howell was the players' representative and I can’t think of any players who came out backing anyone else.

Clarke has been a loyal servant to the European Tour and I don’t think O’Grady would have wanted to upset the apple-cart if things were already leaning towards Clarke. There was one other person on the panel…

Not everyone will be aware but Darren Clarke and Paul McGinley are not the closest of friends. They were both part of the same ISM management stable which McGinley left. Clarke backed Montgomerie for the captaincy in 2014, not McGinley.

There definitely seems to be some history between the pair. However, McGinley was very quick to point out that he was happy to put their differences aside ahead of the selection process.

If McGinley applied the same level of professionalism to his post-captaincy duties as he did when in the job then Clarke would have got his vote.

There were mixed messages from Miguel Angel Jimenez on whether he actually wanted the job. He didn’t, then he did etc… There have also been concerns about the language barrier and whether he’d be able to communicate effectively with the players.

Jimenez seems destined to be the bridesmaid when it comes to Ryder Cup captaincy but that is probably his most effective role. A senior, respected and experienced campaigner who knows how to enjoy himself.

He’s the guy there to help the players relax and feel good about themselves. The responsibility of captain may not suit his laid-back style. Thomas Bjorn was also in the mix but we can’t recall anyone championing his cause.

There does seems to be a slight feel of ‘whose turn is it?’ when it comes to selecting a European Ryder Cup captain. And if Clarke didn't get it now, would he get it further down the line?

However, out of the three candidates, Clarke had the biggest profile in the USA and very good Ryder Cup pedigree.

Over the past 12 months, the Darren Clarke we’ve seen on the golf course is literally half the man than claimed the Claret Jug at Royal St Georges in 2011. A dedication to lose weight and get himself in good shape has to be commended.

He will no doubt pour his heart and soul into the job but it will be a huge test to see if he can keep his emotions and relationships with others in check.