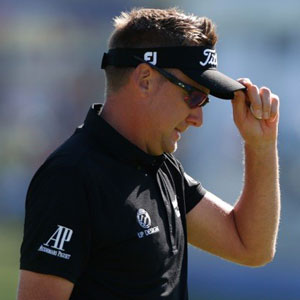 
Things had been going pretty well for Ian Poulter this week. The Englishman found himself in contention at the Farmers Insurance Open - three shots off the halfway lead - and was feeling happy with his game.

But after going out for dinner on Friday night, things took a turn for the worse.

Poulter and caddy Terry Mundy returned to the parking lot after enjoying a meal at a Korean barbecue restaurant only to realise the hire car was missing.

Initially, the 39-year-old though the vehicle had been stolen but further investigation concluded it had been towed for being parked in the wrong place.

"There were 60 spots in the car park. We walked 40 yards to a restaurant, but apparently that restaurant that we ate in wasn't quite in the vicinity of where I should have parked," Poulter said.

"The kind security guard who was standing by my car as I parked waited until I left and then called a tow truck to tow it away so he could make some money.

"I told him my car had been stolen," Poulter added. "He said, `Nope, we towed it away.' I said, `That was awfully nice of you.' A few similar words."

Poulter was forced to call a taxi and leave tournament organisers to sort out the mess.

He eventually finished the tournament in a tie for 19th place.


Torrey Pines played very tough this week, too tough for many of the world's best with Phil Mickelson, Justin Rose, Dustin Johnson and Jordan Spieth among those who missed the cut.

But Mickelson insisted it wasn't the course which got the better of him - it was his performance with the short stick.

Following his exit at the halfway stage, the five-time major winner described his putting as "beyond pathetic" and is genuinely concerned about the impact it could have on his year.

“It's very frustrating for me right now,” said Mickelson, who had 31 putts in his second round, including two three-putts to run his total to five for the week.

“I felt really ready to start the year and these first few weeks have been very poor. I feel like I'm hitting the ball tee to green quite well, really well, but my putting is beyond pathetic and if I can't get back to the levels of 2013, I'm not sure what I'm going to do because this is very frustrating.

“But I don't think that the claw's the long-term solution, although I think it's a good way to putt, but it's not ultimately where I want to be. But I'm not sure what I'm going to do.

“I spent a lot of time in the off season with ball striking, with driving, with a lot of the areas that I'm doing well right now, primarily because I thought my putting was fine.


After his win at the Waste Management Phoenix Open, Brooks Koepka headed to San Diego full of optimism. And even a cringe-inducing five putt on the 18th on Friday couldn't dampen his spirits.

The big-hitting American, who leads the PGA Tour for driving distance, made the green at the par-5 18th in two but missed his eagle putt by six feet. Then the birdie putt missed, then he missed from 2 1/2 feet. Then again from just over 2 feet. The fifth one went in and as commentator screamed with horror, Koepka stayed in good spirits.

“Nothing else to say. I missed them,” he said. “I thought I hit pretty good putts. The worst putt I hit was the third putt. But it’s golf. It happens.”

The former world number one and 14-time Major winner was forced to leave the course after 11 holes of his opening round on Thursday.

Woods appeared to be in pain after hitting his tee shot at the 12th - his third hole of the day - but carried on for eight more holes.

In a brief word with reporters, Woods said his lower back got tight during a fog delay that suspended play for more than two hours.

"My glutes keep shutting off and that causes me pain in my back," he said.

"It got worse as we stood waiting on the putting green during the delay and I tried warming up my glutes, but it just wasn't working for me.

"When we went back out, it just got progressively worse."


Torrey Pines set up too tough?


Although the finishing score of -9 by the tournament leaders was more than respectable, the scoring average at Torrey Pines was nearly two shots higher than the 2008 US Open.

Narrow fairways and think rough made life difficult for the players. Just look at the calibre of those who missed the cut.

Eventually winner Jason Day claimed he enjoyed the "stressful" test (easy to say when holding the trophy) but this wasn't the US Open. A golf course doesn't have to be set up as difficult as possible simply for a PGA Tour event.

Viewers want to see great golf from the world's best golfers - rather than them hacking it out of think rough and unable to get any sort of control on the greens.