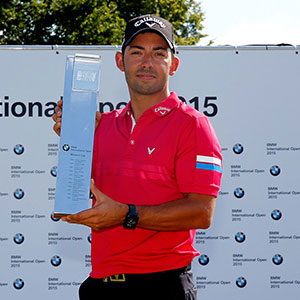 Larrazábal emerged from a congested leaderboard recording five birdies on the front nine, and what proved to be a decisive gain on the 16th hole to take his fourth European Tour title.

“Every title is very special, but this place, from the first time I arrived to this golf course, it's something that suits my eye," said Larrazábal. "It suits my eye from the tee and on second shots and on the greens. I am lucky, winning four times, and three very special ones, because obviously I have won this one twice. There was an article where they called me the "giant killer." In France, Monty was runner-up, and here, four years ago with Sergio runner-up, in Abu Dhabi with Rory McIlroy and Phil Mickelson, and this time, Henrik Stenson. So it cannot be a lot better.”

The Spaniard's 17-under par total proved just enough to edge him past Stenson, who had surged up the leaderboard with a final round 65 that featured five birdies and an eagle on the par five 11th hole.

“I guess those two holes (11 and 12) were worth coming and watching," Stenson said of his excellent eagle and follow up birdie. "It was not free today. You had to pay admission to come in, so I guess I gave them something to watch there.I hit some great shots and took full advantage of those two holes and thought if I could post a low number in the club house, see what happened. I'm very happy with the way I putted and played today.”

Larrazábal's previous BMW International Open win came in 2011, where he bested Sergio Garcia in a play-off, and this victory is his first since the 2014 Abu Dhabi HSBC Golf Championship, when he held off Rory McIlroy and Phil Mickelson.