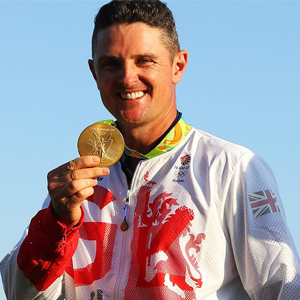 Justin Rose is your new Olympic champion and, after all the talk of the no-shows and apathy towards golf rejoining the Games, we got a head-to-head between two Major champions (and Ryder Cup partners) as the Englishman pipped Henrik Stenson.

The pair came to the 72nd hole locked at 15 under but Rose produced the coolest of pitch shots to a couple of feet to become Britain’s latest gold medal winner. Stenson, who came out on top in another Sunday shoot-out at Royal Troon, three-putted for a 68 to claim silver.

Never before has third place been so relevant and America’s Matt Kuchar took the bronze with a sizzling 63, the joint best score of the week alongside first-round leader Marcus Fraser.

Thomas Pieters finished one shot outside the medals after a closing 65 and he will rue his Saturday 77.

Rose began the day one ahead, both players picked up three shots in the first five holes and Stenson was level after a two-putt birdie at the 10th.

Stenson, ranked fifth in the world, then had to receive treatment from a physio after hitting his tee shot at the 14th. Moments later he had hit a poor chip to drop his first shot of the day, Rose holing from 15 feet to stay level having bogeyed the previous hole.

By this stage Kuchar was now only one back after stiffing his tee shot at the 17th but he was unable to add another at the last which left Rose and Stenson to battle it out for gold.

Rose birdied 15, Stenson the next and it all came down to the 72nd hole where Rose closed out golf’s return to the Olympics in some style.

What Rose said: “It feels absolutely incredible. I was on that last green, just sort of pinching myself and taking myself back to the quote that I had given about the Olympics all along – I hope my resume one day reads ‘multiple Major champion and Olympic gold medallist’. But let’s just call it Major champion and Olympic gold medallist, I’d be a very, very happy man. To come out with a gold is unbelievable. It sits alongside the US Open trophy for me.”

Justin Rose's win in numbers…
• It was Rose’s 16th career worldwide win as a pro
• Rose has now won in nine different countries
• It was Rose’s first win worldwide since the 2015 Hong Kong Open
• Rose should go up to ninth in the world rankings
• He is now 7-for-20 converting 54-hole leads and co-leads
• Rose led the field in strokes gained tee to green and in greens in regulation (77.8 percent)