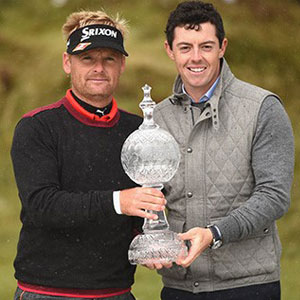 Søren Kjeldsen claimed a narrow playoff win at the Irish Open after what he described was “a brutal day” at Royal County Down Golf Club.

It was a first win in almost six years on the European Tour for the 40-year-old and his fourth overall.

Difficult conditions hindered tournament scoring with under-par rounds at a premium, a relatively modest score of two-under par was needed for three men to enter a playoff.

England’s Eddie Pepperell and Austria’s Bernd Wiesberger contested the trophy with Kjeldsen in extra holes after the Dane slipped back with a five-over-par final round.

Kjeldsen was the only player to birdie the par-5 18th in the play-off and in doing so took the title.

“The other tournaments have never been like this,” commented Kjledsen. “It was obviously a very difficult day and I decided not to look on the leaderboard but once I started dropping shots I started looking. It gave me a little bit of pleasure that I wasn’t the only one struggling. It was just a brutal day.”

Tournament host Rory McIlroy was unable to make the cut at his Foundation sponsored tournament, carding an opening round nine-over par proving the conditions and course a challenge for even the World's best golfer.

“I’m very proud to be associated with what has been an incredible event,” said McIlroy. “To bring this event to Northern Ireland and to see the amount of people that came out to support it and not just support – but we’ve done a lot of great things for the foundation as well. I’d just like to thank the sponsors – Dubai Duty Free – for getting on board. I want to congratulate Søren. He’s a very worthy winner.”

Kjeldsen claimed he had never been more nervous on a golf course. "Three weeks ago I was 113 in the Order of Merit and my game wasn’t in good shape,” he said. "Turning 40 you wonder – ‘is that it?’ That was three weeks ago and now I stand here it’s pretty remarkable really.”

“I think the last breath I took was about on the 14th. I’ve never been as nervous as this for some reason.”

With this win Kjeldsen has gained entry into The Open at St Andrews, with Pepperell and Tyrell Hatton gaining the other two entry slots available.

Speaking of his Open qualification, Pepperell said: “This is something I can really look forward to for sure. I have been in St Andrews a lot in my amateur career and on Tour so to go back there for an Open Championship will be quite something."

"Obviously I'm very happy about qualifying for The Open. I was lucky enough to qualify for my first Open when I was 18 and that was at St Andrews so to be going back five years later is fantastic. It's a great place and I just can't wait to get back there," commented Hatton.