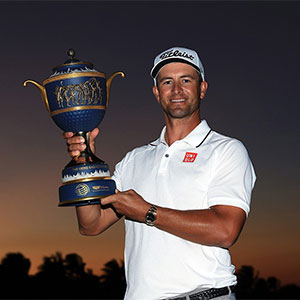 Not too long ago people were wondering where Adam Scott had disappeared to? Then they doubted how he would cope with the short putter.

Then he was second behind Bubba Watson at Riviera before winning back-to-back at the Honda and now the WGC at Doral.

The Aussie trailed by six after a second double bogey of the day at the 5th but he birdied 6 and 8 and added four more within the first five holes of the back nine.

Coming home he had a shank out of the bunker at 16 and somehow avoided the water at the last but a 10-foot par save, for a 69, was enough to pip Watson.

The American looked likely to add a second victory of the year when he rolled in a 60-footer for an eagle at the 8th and a birdie at 17 posed the question. A par to win for Scott at one of the game’s toughest holes.

Danny Willett, playing with Watson, tied for third with Rory McIlroy with Phil Mickelson in fifth.

Overnight leader McIlroy, three clear at the start of the day, had a steady start but was soon caught around the turn when he bogeyed 7 and 9 while his par at the 8th included a visit to the water.

Thankfully it wasn’t the putter that was to blame, he was unable to locate enough fairways and he had to wait until the drivable 16th for his first birdie of the day.

What Scott said: “I thought it was really solid stuff last week. Today was a little bit different. There were some ugly shots and some ugly results.

“That’s winner’s luck (at 18), really. Those things even out over a long period of time where at some point, I would have hit that shot and it's bounced back in and you don't win, and other times it stays up and you do. To take advantage of it feels really good.”

Scott moves in the 6th place in the Official World Golf Ranking with McIlroy up to 2nd and Willett now in 11th place.