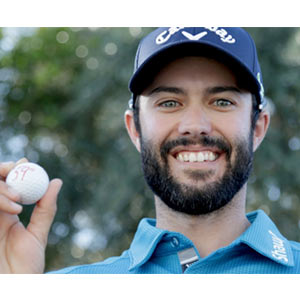 Just nine days after Justin Thomas became the latest player to break the magical 60 barrier Adam Hadwin made it eight 59s on the PGA Tour. Ryder Cup captain Jim Furyk remains the only player to shoot 58.

La Quinta Country Club was the venue for Hadwin’s 13-birdie show and, in the process, he tied Chip Beck for the most birdies (13) in a round on Tour.

And it could have been even better, in the loosest sense that he only parred the last.

There were six straight birdies from the 2nd, just one in three holes around the turn before getting back on the bike with another five on the bounce from the 11th. Hadwin admitted that he first started thinking about the possibility of a 59 walking off the 11th green.

The 17th saw a 13th birdie and he got up and down to get the job done.

And this was just the third sub-60 round (Beck and Paul Goydos were the others) without the help of an eagle.

A 29-year-old Canadian who has been playing on the PGA Tour since the 2015 season – his previous wins have both come on the Web.Com in 2014.

His father is a pro in Canada and he represented his country in last year’s World Cup at Royal Melbourne. He and partner David Hearn finished 11th of the 28 teams.

Last season he finished 85th on the Money List with two top 10s in 27 starts, his best finish of 6th coming in this same event, the CareerBuilder Challenge.

At the end of last year he showed some signs of form with three top-30 finishes and this was his first start of 2017.

“I walked off 17, and I said to my caddie Joe, ‘Man, it looks like there’s a lot more people following us than when we teed off.

“For whatever reason, any time I hit a putt, it went in. Everybody talks about being in the zone, and it being your day, and it was my day.

“They say one of the hardest things in golf is to follow up a low round. I can’t go much lower. I think that I have to find a way to get rid of it.

“I’m not going to make 13 birdies again tomorrow. I mean, I could, but the chances are pretty slim.”

The scorecard doesn’t tell you that Hadwin hit 12/14 fairways, hit 15/18 greens and had 21 putts, including 15 one-putts…and his amateur partner even managed to improve on his score!

In a word, no but it is getting a bit silly. We might still not have had a 62 in a Major but we are now almost in double figures for sub-60 efforts.