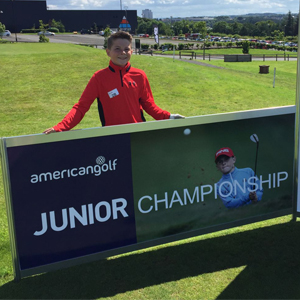 Junior golfers have been battling it out this summer for a place in the third American Golf Junior Championships and the nationwide retailer is delighted to announce a line up for the showcase final that boasts some of the U.K. & Ireland’s best young golfers and finest sporting characters.

The final, to be held at PING HQ Gainsborough Golf Club, will see qualifiers in four categories from six regional events take to the fairways in a bid to claim one of the titles on offer. The Best Gross score category has attracted some of the best junior talent around. Leading the way for the qualifiers is Joshua Berry of Doncaster G.C. who made his way up to the Scottish qualifier to post a fantastic winning round of 66. Close behind is Nathan Newton from Upton by Chester G.C. who weighed in with a 68 at the challenging High Legh Park qualifier.

The Best Net category saw many golfers playing the rounds of their lives, and no doubt taking a few shots off their handicaps! Special mention must go to Gaudet Luce Girls junior section that provided the winner and runner up in the mixed Best Net category with a Net 10 under from Amy Reane and a Net 7 under from Grace Brown. Alice Brooks, capped an incredible day for Gaudet Luce by taking the Best Gross title – the only Girl to do so – with an impressive round of 2 over. The Girls section was no less competitive though with both Abbi Wheatley from South Moor G.C and Djalace Van Rea Merwe from Telford G.C. both posting qualifying scores of 7 under handicap.

The Cardiff and Shire qualifiers became family affairs with Glamorgan County players, brothers Kurtis Wara and Jacob Harrington Wara taking first and second spots in the Best Gross at Cardiff and Ryan and Tiger Georgiou progressing from The Shire with runner up in Best gross for Ryan and the PING Star of the Future award in the under 8 category for Tiger for the best displaying the spirit and character of the game of golf.

The PING Star of the future award is at the heart of what is important to American Golf with these Championships as American Golf Director of Marketing and Communications, Daniel Gathercole, explains, “I’m delighted that the quality of golf on show gets better every year at the Junior Championship but it’s the sportsmanship and attitude of these young golfers that impresses me most. We wanted to create an event that brings together the best junior golfers in the U.K. & Ireland but also showcases the best attitude and character at the heart of golf. With the help of our fantastic sponsor PING we’ve created a wonderful event that is competitive, sporting and most of all, fun.”

The final of the American Golf Junior Championship is at Gainsborough Golf Club on 17th August.

PING Star of the Future (Under 8)

PING Star of the Future (Over 8)