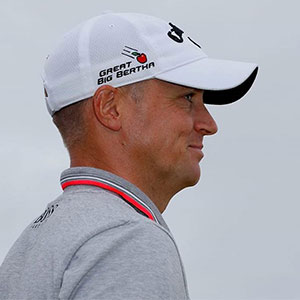 Alex Noren made it five wins on Tour, and all of them having held the 54-hole lead, after closing with a 70 at Castle Stuart.

The Swede was briefly caught but never overtaken and a birdie at the 15th after a stellar approach gave him a two-shot advantage.

Playing partner Tyrrell Hatton birdied the 72nd hole to reduce that to one but Noren’s par was enough.

Hatton’s second place booked him a place in this week’s Open Championship along with Nicolas Colsaerts, Matteo Manassero and Richie Ramsay – Colsaerts came home in 30 for a 66.

Ramsay was looking to become the first Scottish winner of this event since Colin Montgomerie in 1999 and he birdied four on the trot from the 3rd but never really threatened Noren.

Danny Lee did though and was tied for the lead after a birdie on the 10th but eventually had to settle for third.

The win represents the first time Noren has won in consecutive seasons after his victory in the 2015 Nordea Masters and continues his remarkable comeback after missing most of the 2014 season with wrist injuries.

Former winner Phil Mickelson had a bogey-free 66 to tie for 13th while fellow Major champion Graeme McDowell finished in the top 10.

What Noren said: “This is by far the biggest win of my career, with the quality of players who are here, and on a course like this in Scotland, it’s what I dreamed of growing up.

“I’m just happy it’s over, because it was a tough, tough leaderboard. A lot of guys were 11, 12 and 13 under, so it was not a comfortable win at all. But thinking about it this morning, how much it would mean to me, it felt so far away but now that it’s happened, it just feels unbelievable.

“I changed my driver coming into this week, and it definitely helped a lot. It’s an amazing feeling, and hopefully I can carry this confidence and form into the Open next week.”

It was a good day for Callway staffers with Noren, Colsaerts and Manassero representing the brand. Noren actually put a new Callaway XR 16 driver in the bag for the week.