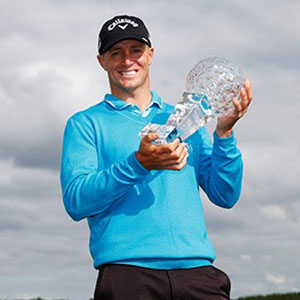 Alex Noren was the homegrown hero in Mälmo after taking the Nordea Masters title by a four shot margin after almost a year out through injury.

The Swede controlled the final day's play, leading from start to finish after carding a final round one-under par round, sitting at 12 under for the tournament.

Playing on a European Tour medical exemption after suffering wrist tendonitis over the previous 12 months, the 32-year old had looked on for what must have felt a long time on the sidelines.

"Even when I got back playing - just before Christmas- I didn't play very well," Noren said. "Then something clicked in the earlier part of this year.

"So it feels a lot better and now it feels very very nice."

This is Noren's second Nordea Masters title, with the Swede's first win coming in 2011.

"It's very very pleasing," said Noren. "I've been very nervous all-day and it was so tough the last few days.

"It was so tough and I just want to relax now a little bit."

The conditions on course proved difficult for many players, with very few under-par rounds being carded.

"There were so many holes with tough cross-winds," said the Swede. "I didn't hole many putts today, but then in the end I holed a good one on the 17. Which was nice. I had a good save on 16 too.

"It's pretty tough the whole way round.

"16 and 17 are really tough, but I hit my driver really well and set up my Big Bertha driver to very much upright and it helped in the winds up here.

"I had an easy time to fade it, but when I can draw it I'm not as nervous playing in this wind. That made a big difference in my mental feelings."

Irish Open winner Søren Kjeldsen finished four shots behind Noren at eight under for the tournament, with Nicolas Colsaerts a further five places back at five under.

"Alex is an incredible player and I’m very pleased for him winning in his home country," said Kjeldsen.