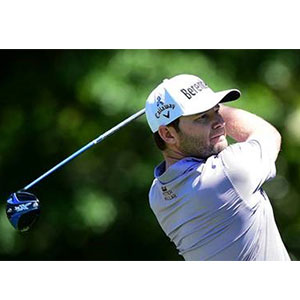 The South African, who has seven wins on the European Tour, is now off the mark in the States after a 66 gave him a two-shot victory.

For Luke Donald it was the 10th time he had held a 54-hole lead and he has still only converted twice. The Englishman had birdies at 7 and 9 but the only putts he holed coming home were for pars. His sand save at the last meant that he tied Scotland’s Russell Knox for second.

Grace shot a closing 66 and the bulk of the damage was done with five birdies on the front nine. He then rolled in mid-range putts at 12 and 13 to bolt clear and, despite a bogey at the short 17th, a par left his challengers with too much to do at the last. A par at the 16th was particularly impressive after two visits to sand.

Grace had two top fives in the Majors last year but missed the cut at Augusta last week. However there was no sign of a hangover as he posted his second 66 of the week on Sunday.

Bryson DeChambeau was playing in his first tournament as a professional and his 68 for a share of fourth meant that he wouldn’t have to use this as one of his seven sponsor’s invites.

What Grace said: I have spoken to Ernie in the past about this event. And he thought it’s one that’s really going to suit my eye. It reminds me a little bit of Fancourt Links back home, because it’s linksy. You really have to see your thoughts. You have to hit a couple of different shots, not shots that you hit often.

“At the beginning of the week we actually spoke on Wednesday, we went to his house for coffee. And he told me this is one event that I’m going to win a couple of times in my career. It was nice to hear from a legend like that. And obviously Ernie said, I told you you were going to win it a couple of times.”