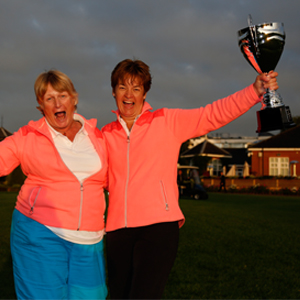 American Golf is delighted to announce Maggie Hopkins and Sarah Cooper Olsen as its first ever Ladies Champions after a close fought 36 hole final. The pair, both based in Worthing, came together to score an impressive 63 points over 36 holes, taking the title from Charlotte Hinge and Céline Graciet of Brighton & Hove G.C.

Bringing together qualifiers from events held all over the U.K., Grand Finals weekend saw some great golf played under difficult conditions at Ryder Cup venue the Belfry. The first round of the championship was played on Friday afternoon on fast greens and through windy weather. Scoring was tough and competition was tight with only celebrity pairing Lauren Spray from England Golf and Kate Surman from the event charity On Course Foundation standing out. The pair, who were sponsors invitations to the Championship and ineligible for the main prizes played wonderful golf going in 5 ahead with 36 points.

Going into Saturday the heavens opened for the final round and while the greens settled a little, scoring was equally as hard as teams struggled for consistency in the wet. Overnight leaders Esther McNeil and Jayne Martin fell away with 26 points to leave three pairs battling it out for the title. Along with the eventual top 2, mother and daughter Bronwyn and Tracy Davies showed incredible consistency despite the conditions but no one could keep up with Hopkins and Cooper-Olsen who continued a fantastic recent run of form.

“I’ve had an amazing year of golf,” commented Maggie after the win. “Since the qualifying event I’ve been cut from 28 to 21 with the last 4 coming a week ago. I had my first ever eagle on Tuesday and now this. American Golf have been fantastic this weekend and this really is an incredible end to the best golfing period of my life.”

Both the Davies’ and Hinge & Graciet scored very strong 61 point totals with Hinge & Graciet securing second spot by virtue of countback. Charlotte Hinge, a project manager playing off 17 reflected after their final round, “I’m absolutely gobsmacked! I didn’t lose a ball all day and am chuffed that we’ve managed to get second place.” 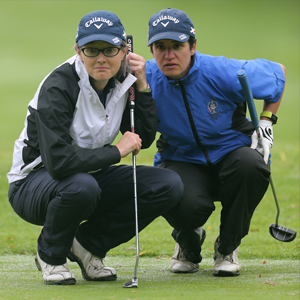 But no-one could keep up with the consistency of the winning pair. A second round 32 points on top of 31 from Round one gave Hopkins and Cooper-Olsen victory by two points with a combined 63 point total.

Playing off 10, Sarah Cooper Olsen couldn’t quite believe that they’d reached the final let alone won the Championships. “Maggie invited me to come and play a free round of golf with her at the Rustington qualifier. We sneaked in as third place qualifiers but we put together two good rounds and now we’re Ladies’ Champions! After Maggie was so nervous she hit an air shot on the first I didn’t fancy our chances. I had to hit my drive through tears of laughter and we haven’t stopped laughing since, the whole event has been incredible. My father has been very poorly in hospital so I wasn’t even sure if I would make the event, but he was discharged the morning of the second round so I just relaxed into it and we played really well. Our experience with American Golf has just got better and better and I can’t thank them enough for a wonderful Championship!”

Spray and Surman continued their good form on day two, coming in with 34 points for a two round total of 70 points meaning that they topped the field, helping to raise the profile of On Course Foundation’s work using golf to help wounded, injured and sick Service Personnel and England Golf’s role in increasing participation in the game.

The Ladies Championship has been a huge success so will return in 2017 along with existing free events, 9 Hole, Seniors and Long Drive. American Golf will also be adding five new free Championships focussed on getting more people playing golf more often when they introduce the Family Cup, Pitch & Putt Championship, Adventure Golf Championship, Scratch and Individual Championships.