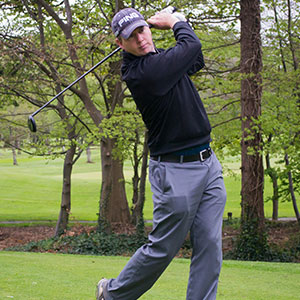 American Golf is throwing the full weight of its support behind Michael McDermott, one of its own PGA Professionals, at the Dubai Duty Free Irish Open.

Michael, 34, has been a PGA Professional since 2004 and now works at the Dundrum American Golf store. He qualified for the Irish Open as top PGA Professional on the Irish regional order of merit and plans to make the most of this opportunity to line up alongside the best in the world.

“I grew up playing golf at Stackstown Golf Club when Padraig Harrington was turning pro and then played alongside the likes of Graeme McDowell in youth golf,” commented the Dublin native, “To be lining up alongside these guys and obviously Rory McIlroy is a fantastic feeling, one I’m certainly going to make the most of.”

To celebrate Michael’s appearance at the Dubai Duty Free Irish Open, American Golf is heading out to County Down for the week. The company will be taking over Quinns Bar on Main Street, Newcastle, from Thursday 28th – Sunday 31st May to shout its support and provide much needed relief from the pressure of competition for Michael and his friends and family.

American Golf will also have its Tour truck parked on Main Street to ensure that any stars of the future have the chance to see the best golf equipment up close on the way to the course.

Dan Gathercole, Head of Marketing at American Golf commented, “It’s not often that one of your own gets to play on the biggest stage so we thought we’d come out in force to show our support. Michael’s been a fantastic addition to our team of PGA Professionals in Ireland and we’re delighted to be able to play a small part in this special week for him.”

Michael continued, “Work have been great, giving me the time I need to get my preparations just right. I’ve got a friend caddying for me, my friends and family coming to support and now the guys from work are taking over the town! This is a great opportunity and I’m going out there at Royal County Down knowing that if I play my best I can compete. I’m not going to limit myself with predictions, I’m just going to try and shoot the best score I can.”

With a full bar on Main street following him, the best wishes of Dundrum behind him and 104 American Golf stores cheering on one of their own, Michael may well be the best supported, least known name on the starters sheet at the Dubai Duty Free Irish Open. American Golf certainly wishes him well and will see him after for a drink!