Steven Cafferty, who works in the East Kilbride store, made his childhood dream come true this week by being one of the first golfers to win a medal at the Deaflympics in Samsun, Turkey. His bronze medal match against Denmark’s Lasse Emil Nielsen went down to the wire. The two athletes couldn’t be separated after 18 holes, but the Scotsman kept his nerve to go 1 up and win the first play-off hole to secure his bronze medal.

“This really is a dream come true,” commented Steven, whose journey has not been an easy one. His deafness often made him feel lonely, angry and frustrated as a youngster, blaming bad rounds and everything else on his deafness. But all the hardwork has been worthwhile as he explains, “You only get out what you put into life and into your golf. All the practising and endless drills are worth every moment of how proud I felt to step up onto the podium and accept my medal.” 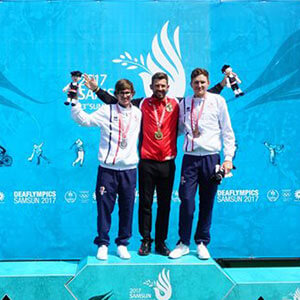 The Gold medal match also included GB talent as Paul Waring went up against Germany’s John Allen who had beaten Steve in the semi –final match. The German’s form continued to impress but GB’s Waring pushed him all the way forcing a play off, which Allen won after hole 1 to take the Gold Medal.

This is the first time that golf has been in the Deaflympics, but the event itself pre-dates other IOC sanctioned events such a the Paralympics. The first Deaflympics took place in 1924 and is held every four years. It is the longest running multi-sport event excluding the Olympics themselves.

Let’s hope that his @DeaflympicsGB team mates continue to bring home the medals and that Steven will be packing his bags for the next summer games in 2021.