Andy Sullivan claimed his second European Tour victory this season with a two-shot victory at the Joburg Open. 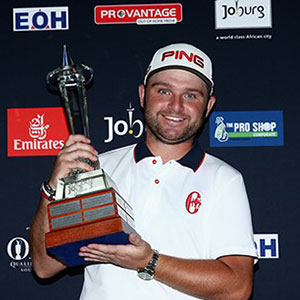 The Englishman took the title after a final round six-under 66 to finish -17 to finish ahead of countrymen David Howell and Anthony Wall.

The 28-year also booked himself a place at St. Andrews for the Open in July with the victory.

"It's unbelievable," Sullivan said at the presentation ceremony.

"I never imagined it would happen again so quickly.

"Coming down the stretch me and my caddie were loving life again and enjoying it.

"It seems to be a theme, enjoying my golf and getting the right results at the moment."

"I want to say a big thank you to my coach Jamie Gough, who has really turned it around, and my psychologist Lee Crombleholme who has been exceptional this week, working hard on being patient out there.

"I am just grateful it has all paid off and I get to hold another magnificent trophy in South Africa again.

"I am on the crest of a wave at the moment and I don't want it to end. I just want it to keep going."

Ireland’s Kevin Phelan and South Africans Wallie Coetsee and Jaco Van Zyl were also in a tie for second place.

Howell and Wall also gain entry to the 144th Open with their runner up finishes.

Howell added: “I’m absolutely delighted with that, it was one of the main reasons for coming here. I haven’t performed well here over the years and I came here specifically to qualify for The Open and to win the tournament so to come away with one of those two things is fantastic.

"It means a lot to play again in The Open. It was one of my goals this year and I’m delighted to have made it.”

Players will have another opportunity to gain entry to the championships at the Irish Open to be held from the 28th to the 31st May.