The US made light work of the International team to retain the Presidents Cup – but not before another rules fiasco.

Anirban Lahiri had to birdie the 16th and 17th holes in the Saturday afternoon fourballs to prevent the US closing out the Internationals a day early, something which has never happened in either the Presidents or Ryder Cups. It was that one-sided.

On Sunday, needing just one of the 12 singles, it was all over by the time Daniel Berger had beaten Kim in the fourth match out. The final score was 19-11 but that didn’t even reflect what a drubbing this was given that Nick Price’s side picked up seven and a half points on Sunday.

For the record the Americans have now won 10, halved one and lost one of the 12 overall matches – the US have won the last seven.

Dustin Johnson could have finished the week with a perfect 5-0 but was held to a half on Sunday by Branden Grace. Jordan Spieth, Justin Thomas and Patrick Reed all came into the singles with three wins and a half from the first three days but then all lost their head to heads.

For Phil Mickelson, who was the only American not to be part of the Tour Championship and who needed a captain’s pick, it was an undefeated week and he was one of three home winners in the singles, along with Rickie Fowler (also unbeaten) and Berger.

Mickelson is 47 now and this might be his final team outing for the United States. He has never been part of a victorious away team in the Ryder Cup and making the team in Paris will be one of his big goals for 2018. 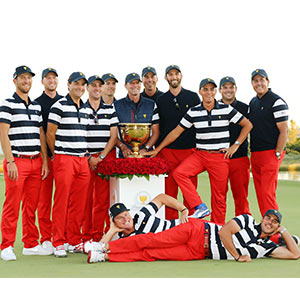 So, onto that rules fiasco.

The Jordan Spieth and Patrick Reed vs. Jason Day and Louis Oosthuizen showdown was all square at the short par-4 12th.

Day pitched his second shot to tap-in range and the Americans conceded the birdie.

Oosthuizen, whose drive had just fallen off the back of the green, attempted his eagle putt. But as it scuttled past the hole, Spieth, knowing his playing partner was already down for three, scooped up Oosthuizen’s still-moving ball and tossed it back to him.

But before Spieth and Reed could attempt their birdie putts, match referee Andy McFee stepped in and disqualified Spieth because stopping a ball still in motion is against the rules.

Day and Oosthuizen tried to argue on behalf of their opponents, but to no avail. Ridiculous? Of course, but the official was only doing his job. Hate the game, not the player.

For what it’s worth, the incident put the Internationals one up but the US recovered to take the match 2&1.