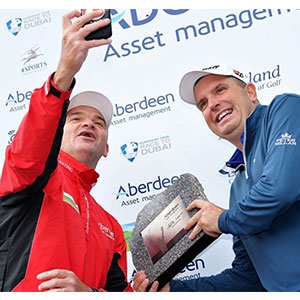 Anthony Wall emerged triumphant at Archerfield after beating Alex Noren at the last in the Paul Lawrie Match Play.

Wall first won on the European Tour 16 years and 204 days (and 431 events) ago – now he is a winner again. Both are, not surprisingly, records.

The 41-year-old, who has seven second places, lost the first two holes but was level by the 6th. He went ahead with a birdie at the 11th and the last seven holes were halved, thanks to a variety of up and downs from the Englishman.

Noren, bidding for an Aberdeen Asset double after his win at Castle Stuart, saw a putt lip out at 17 and another slide by at the last.

Over the course of the week Wall was taken to extra holes against Richard Green in the last 16 and beat Oliver Fisher at the 22nd hole in Saturday’s semis.

What Wall said: “It’s funny – the other one in 2000 felt like yesterday! It’s amazing because it’s such a hard job to beat everyone because everyone is so good.

“I did wonder whether it would ever come again. I’m just so pleased for my parents – they put in so much when I was young. I’ve got two children that just want to see their dad win; I’m speechless, it’s phenomenal.”