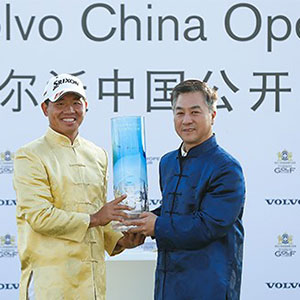 Wu Ashun became the first Chinese player to win a European Tour event on home soil as he held off a spirited challenge from England’s David Howell at the Volvo China Open.

The Chinese national recorded his third professional win, and maiden European Tour title after carding a final round one-under par, nine-under for the tournament.

Howell, a former Ryder Cup star, had initially took the lead when he got up-and-down from a second hole bunker to birdie, but he bogeyed the fourth after a poor chip and a birdie from 15 feet on the fifth took Wu one ahead.

Englishman David Howell provided a challenge until the final hole, but a his bogey was enough to hand victory to Ashun.

Howell missed the 18th fairway and then the green before missing his eight foot par putt to take the tournament to a playoff.

"I was in very good shape to win the tournament for most of the day, and didn’t get the job done.

"So it’s going to hurt for a while, but I didn’t do a lot wrong.

“I holed a lovely putt on 17 to save par to give myself every chance coming down the last.

"It felt like I was already in a play-off, because Ashun was in the clubhouse on nine under, so if I birdie the last I win the tournament, and if I make bogey I lose it.

"Unfortunately it was the latter.”

“I have many friends here, and they helped me a lot and pushed me to play well.”

The 29-year old now has an exemption status for European Tour events with this win.