The Par 3 contest at the Masters is being streamlined this year with former major and US Amateur champions not being allowed to take part in the Wednesday jamboree or play practice rounds, according to an Associated Press report.

Up until this year those ‘honorary invitees’ would tee it up in the Par 3 or join their compatriots in practice rounds but the club have now changed the rules.

“It was my favourite day of the year,” former Open champion Ian Baker-Finch said.

Two-time US Open Curtis Strange could see the thinking behind the move though.

“We had our time, and now it’s their time,” Strange said. 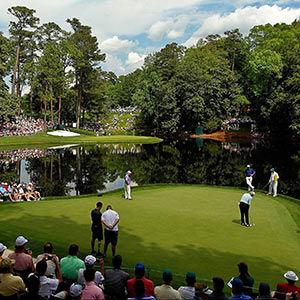 “I think it’s extremely nice that we’re invited to come back with your spouse. It’s been nice for these guys who want to hit balls and play practice rounds. But times change. My sense is that the Par 3 was getting a little bit crowded and taking a little bit too long, I think that’s fine.”

But before we all feel too sorry for the major greats they will continue to receive two clubhouse badges, a $1,000 honorarium (another word for a payment) and a gift.

Nothing has been said yet about the prospect of wives, girlfriends and parents shanking one into the drink at the 9th before Little Johnny holes out, via daddy’s foot, up ahead on the green.