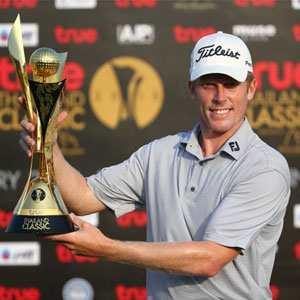 Finishing on 16 under par, the 29-year-old pipped Jaidee by one shot with the home favourites missing a putt on 18 to force a play-off.

Fellow Australian Scott Hend, who led going into the final round, finished with a level par 72 to join Jaidee in a tie for second.

Halfway leader Jiménez had started well with back-to-back birdies in his final round but the 51-year-old Spaniard did not gain another shot all day as a 73 left him in a share of seventh.

Jaidee was level with Dodt with three holes to play but bogeyed the 16th and could only manage pars on the final two holes.

“To be honest, losing my card two years ago was probably the best thing that could have happened to me.

"I went home last year, spent 12 months at home, played the Asian Tour again, found myself again, found my game and to be in the winner’s circle again – it’s unbelievable.”

“I played really well yesterday and today but I just didn’t think I’d come out on top. I knew I was playing well but to come out and win is just a dream come true.”

The Australian did not drop a shot in his final round, eventually shooting 67.

Afterwards Hend said: “I pressed for the win on 17 and got a bit aggressive with my bunker shot, and I finished one shot behind. I came here to try to win.

“But all in all it was a good solid week and there are a lot of positives to take out of it. It’s good to see Dodty winning, fantastic.

"Obviously I wish it was me standing there winning, but congratulations to him - he’s played well over the weekend and all credit to him."