Ben An wins the PGA Championship at Wentworth 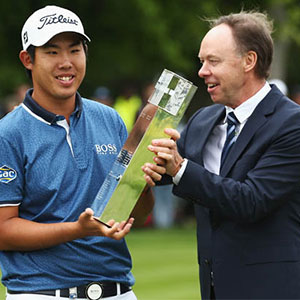 Byeong-Hun An left the field for dead at the BMW PGA Championship with a six-shot margin of victory over nearest rival at Wentworth to become the first Asian winner of the European Tour's showcase event.

"I wasn't expecting this. I didn't know that a win was this close. It came all of a sudden. I've been playing well all year but I never thought I would win this event.

"It was great to go into the last hole with a six-shot lead and I love that I'm the first Asian to win this event. It's great."

A former US Amateur winner, An recorded a blemish free final round 65 to take the title ahead of Miguel Angel Jimenez and Thongchai Jaidee at 15-under.

The 23-year old is currently ranked 132nd in the world, took complete control of the final round with a seven-under final round to add to opening rounds of 71, 64, 67 and 65.

"I think I did really well all week. I putted well so my confidence has built even as I was walking to 18.

"It wasn't easy, but it looked easy I guess!," added the 23-year old European Tour rookie.

An becomes the only the third rookie to win the event in it's 60 year history joining British pair Bernard Gallacher (1969) and Scott Drummond (2004) as rookie winners of the tour's flagship event.

"it's like a fifth Major to me," commented An. "It's the biggest title I've won and it's great to win this event as it will get me into a lot of events."

The 2009 US Amateur winner now gains automatic entry to the US Open and The Open Championship.

The South Korean fielded questions from Sky Sports about the strength of the game in his home nation, with many of the LPGA's top stars hailing from his nation.

"We've got to do better and step up our game," commented An. "In the LPGA they're doing well and hopefully the Korean men's golfers will continue to do well.

"I'd like to thank the spectators and Wentworth for hosting this event."