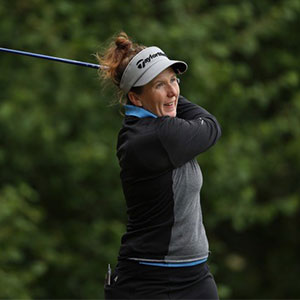 Beth Allen’s story is a fascinating one. While most women dream of making it to America, Allen has crossed the Atlantic to make her name.

Allen is one of the most popular players on the LET having joined in 2008. She now lives in Edinburgh and plays at Falkirk GC.

Now she has a win having prevailed at the Ladies European Masters at The Buckinghamshire.

The fascinating part of the story is because the Californian donated a kidney to her brother in 2011.

Three years ago Allen had a treble-bogey seven at the 17th with the tournament in her grasp.

This time she finished with a 67 to squeeze past World No. 1 amateur Leona Maguire.

And on her bag was Sophie Gustafson, who will be one of Carin Koch’s assistants at this year’s Solheim Cup.

"I'm so happy," said Allen, who finished second in the same event three years ago after carding a triple-bogey on the penultimate hole. "I did not have a lot of expectations because I got my heart broken here in 2012 and had not made the cut since.

"I am just so pleased. I was never sure if it was going to happen. Sophie really kept me grounded and I ended up getting it done."

For the kidney donation Allen twice had to twice go through three days of 24-hour urine collection, a CT scan of all her organs, two electro cardiograms and ‘a lot of blood work’.

The operation took place on March 1 and she was back playing in May.

And her brother is doing well.