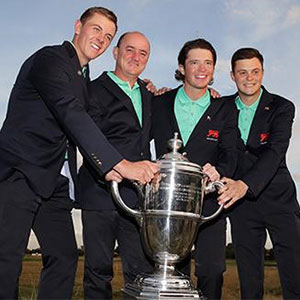 The brightest and best young players in the British game won the Walker Cup in style on Sunday afternoon, defeating a much-fancied American team to reclaim the trophy by a winning margin of 16.5-9.5.

Led by the US Amateur champion Bryson DeChambeau and Open Silver Medal winner Jordan Niebrugge, Team America were expected to put up a stiff challenge in their defence of the Walker Cup, but it wasn’t to be.

The GB&I team, brought together by captain Nigel Edwards, stamped their authority early on the final day of the amateur tournament at Royal Lytham & St Annes by winning the morning foursomes by a score of 3-1.

Team captain and Walker Cup veteran Nigel Edwards had told his players to enjoy the experience of playing in the tournament, and in the early September sun on the Lancashire coast, the GB&I team did just that.

The unbeaten double European Amateur champion Ashley Chesters was the first to return a point in the afternoon, with a 3&1 victory over Niebrugge, while the decisive points quickly followed over a devastating 20-minute period.

Edwards had gone for the jugular by sending his best players out first, with Jimmy Mullen and Cormac Sharvin followed Chesters’ lead in winning their matches, while Paul Dunne’s was the first to make it down the 18th hole – he halved his match with Maverick McNealy to get GB&I over the winning line.

The morning foursomes saw GB&I build a four-point lead, with the pairing of Ashley Chesters and Jimmy Mullen turning their match around to win 3&2, and 54-hole Open leader Paul Dunne and Gary Hurley winning their match, despite trailing at the 14th hole.

Brabazon winner Cormac Sharvin and his University of Stirling roommate Jack McDonald, who had only played together once before, were never behind in their match and Edwards said: “It was a good morning because at one point it could have been 3-1 the other way.

“Ashley and Jimmy really turned the screw on them and coming down those closing holes they did really well. Gary and Paul just do what they do – they just hang in there and got the win in the end.”

Given the poor weather conditions on Saturday morning, Team America will not have been too disappointed to finish Saturday with the score at 7-5.

Especially as it could have been even better for the home team, who at one point were up or level in all eight matches.