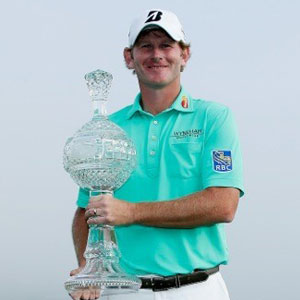 
American secures place in The Masters after ending 18-month drought.

Brandt Snedeker revealed it hasn’t been much fun being out of the the winner’s circle for the past 18 months but is glad to be ‘relevant’ again.

The 34-year-old had not managed victory since the RBC Canadian Open in 2013 but found his form to clinch the AT&T Pebble Beach National Pro-Am for the second time in three years.

Finishing on -22 and with only one bogey all week, Snedeker broke his own scoring record in the event.

Snedeker, who missed out on last year’s Ryder Cup after a slump in form, always believed his next win was round the corner.

“I kind of struggled with my game a little bit and didn't be where I want to be, playing the tournaments I want to play in.

“I worked my tail off last year and didn't get result that people were accustomed to me getting.

“I knew it was coming. It was just hard to be patient. To do that this week, be patient enough to wait for a tournament like this to happen.

“I might need to buy some real estate here. I love being here at Pebble.”

The victory is Snedeker seventh on the PGA Tour, firing him from 58th to 31st in the Official World Golf Ranking, securing his place at The Masters.