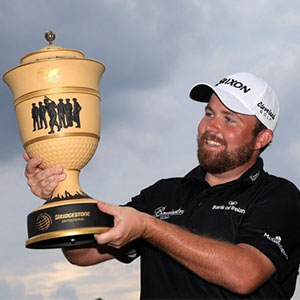 In the past couple of seasons Shane Lowry has begun to sniff around the Major stage, now he has a WGC title to his name after finishing with a 66 to beat Bubba Watson by two shots.

The 28-year-old didn’t drop a shot, made a ridiculous birdie at the 10th, a brilliant par at the 14th and then a closing birdie from the undergrowth that lines the left-hand side of the 18th.

Previously Lowry had won twice, the first time in his national Open while still an amateur in 2009 and then in Portugal three years ago.

Before this week Lowry was a non-member on the PGA Tour.

He entered the week with the equivalent earnings of No. 121 on the current money list, he now has a two-year exemption and is immediately eligible for the upcoming FedEx Cup play-offs.

The final pairing of Justin Rose and Jim Furyk failed to fire with a pair of 72s. Furyk has held the 54-hole lead 10 times since 2011 – and failed to win any of those tournaments.

"It's hard to believe but I played good,” Lowry said.

"I was quite nervous out there towards the end but made a lot of good decisions, hit the ball well and got a bit of luck as well which was nice.

"It's great to be able to pull something off. I was kind of doubting myself a little this year, things haven't been going my way but when you come out the other end it's always nice.

"I was just going in there (at the 18th) praying that I could get it down there on the green. It actually had a pretty horrific lie. It was sitting down in a hole. It was almost like someone had stood on it, but it was where the crowd was walking."

Lowry will be hoping history repeats itself as good friend Rory McIlroy went on to win the PGA Championship after his Firestone triumph last year.