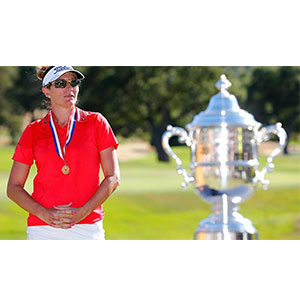 There was another USGA rules mishap as Brittany Lang overcame Anna Nordqvist to win the US Women's Open.

Last month at the men’s US Open champion Dustin Johnson (and his nearest competitors) played the last seven holes at Oakmont not knowing his actual score.

Now, at the US Women’s Open, Anna Nordqvist and Brittany Lang were in a play-off for the title when the Swede ground/grazed her 5-iron in a fairway bunker at the second extra hole, the 17th at Cordevalle.

The controversy here was not the ruling, a two-shot penalty, but the timing of the information passed on to the players – Nordqvist had just played her third shot to the 18th when she was told of the addition of shots.

Lang was just about to play her third so the timing was out of sequence.

The American then changed her club, played away from the water and made her par that way.

Had Nordqvist known that she was suddenly two shots in arrears, she would have been more aggressive.

Lang (71) and Nordqvist (67) both finished at six under, two clear of a quartet of players that included Lydia Ko who dropped five shots from the 8th to the 14th.

Nordqvist’s round was the best of the day and included an eagle at the 15th and no bogeys all day. Lang had got to seven under after a long birdie putt at 16 but gave the shot back at the next – this was her 46th Major start and she is the first over-30 player to win on the LPGA Tour in 2016.

What Lang said: “I actually said something to somebody in Arkansas. I just feel like I have extremely underachieved as a golfer. I feel like I’m so capable of doing so much more than I’ve done. And this is just a little start to boost me.

“I had lob wedge out, because I was going to hit a high lob wedge to land soft because I thought I needed a birdie. Right when he told me that, I was thankful he told me before I hit my wedge. I hit a little sand wedge way out to the right, and just tried to two-putt from over there.”

What Nordqvist said: “It’s hard to lose that way, but it’s the game of golf. I wish the USGA would have told me a little bit earlier. I don’t know if it would have changed the outcome, but it certainly would have changed my aggressiveness into the 18th pin. Hopefully these kind of situations are nothing that no one will ever have to deal with again.”