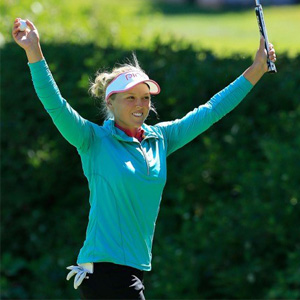 Three weeks after breaking her major duck the 18-year-old Canadian made it back-to-back titles here. She joins Annika Sorenstam and Kathy Whitworth as the third player to defend and she did it by four shots over a back on-song Stacy Lewis.

Henderson went wire-to-wire after opening up with a 65 and she closed with a 71 to stay ahead of Mariajo Uribe who collapsed late on with a pair of double-bogeys to finish. Uribe eventually tied for fourth, Suzann Pettersen had a promising week ahead of the US Open with her third-place finish.

Uribe ran into trouble on the par-5 12th hole with a bogey while Henderson birdied, at the time the pair were level.

What Henderson said: “To repeat and try to defend a championship for the first time and be able to do it is, I think, a really big deal. Third win on the LPGA Tour is really cool.

“I didn’t really play my best, but I hit good shots when I needed to and got some good breaks, too.

“That’s always really nice. It was really tight all day until I looked at the scoreboard on 17 and saw that I was going to have quite a big lead going into the last hole. That was definitely very comforting. It was kind of a weird day of golf. I hit some really good shots and hit some really bad shots, but, like, it all worked out.”