Bubba to get even more colourful 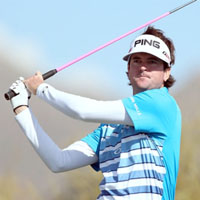 A report from a South Korean newspaper has claimed that Bubba Watson will play a Volvik ball in 2017.

The left-hander, who uses a pink Ping driver, has supposedly signed a multi-year deal with the Asian company which is renowned for its multi-coloured balls. Currently Volvik boast some stellar names in the ladies’ game, including Se Ri Pak, but nobody anywhere near the stature of two-time Masters winner Watson.

His agent Jens Beck called the news “unsubstantiated rumours” to the Associated Press – Watson is currently with Titleist – which goes on to say that the American will receive $1.2m a year plus stock options and a signing bonus.

Volvik USA’s president added some interesting detail in that Watson could use a pink ball for final rounds and maybe a green ball at Augusta.