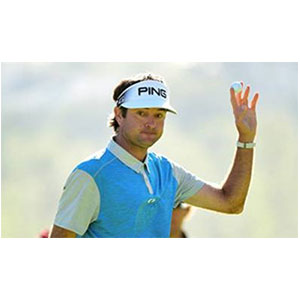 In a week that he made an appearance on a TV show, his son played drums with Justin Bieber, watched an NBA basketball game and passed a kidney stone Bubba Watson birdied 16 and 17 to claim his second title here.

His round got going with a par save at the 10th and a 30-footer at the next. Jason Kokrak led by two but then bogeyed the 15th and Watson’s late birdies did the rest.

Kokrak needed a birdie at the 72nd hole and narrowly missed from 20 feet and Watson’s par meant Adam Scott could pack his bags and go home.

The Aussie had a curious day, making eagle at the 1st, playing the first six holes in five holes, then doubling the 8th and then making back-to-back bogeys at 14 and 15 to look out of it. Then a two-putt birdie at 17 gave him a sniff before he rattled in his chip at the last for a 67.

Rory McIlroy also eagled the 1st but then had seven bogeys in an out-of-sorts 75.

What Bubba said: “I get a good, excited feeling here. I love coming here, the history of this place. The great champions, obviously the real great champions here are a big thing to me. Just seeing the shots over and over. I think that's what makes Augusta so special is that every year, it's that major tournament in the same spot so we can see past champion after past champion.