This was a win that had been coming all season – Burmester has finished fourth, seventh, 41st and 11th so far this year and back-to-back 65s gave him his first win on Tour at Pretoria Country Club.The 27-year-old began 2017 without any playing privileges but seven birdies in his first 12 holes had seen him run away with things. At one point he led by six.

In the end the winning margin was down to three after two late bogeys, Finland’s Mikko Korhonen and Jorge Campillo of Spain tied for second.

The overnight leader Scott Jamieson had a stinker of a day, following efforts of 67, 65 and 68 with a 78 which included three doubles. The Scot began his day with three bogeys in his first four holes and ended up in a tie for 22nd. 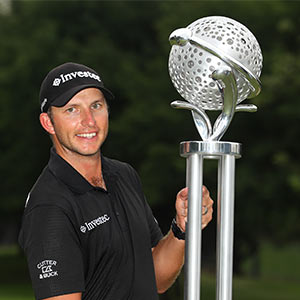 Burmester’s start was quite the opposite, he holed a monster at the first, added two more immediately and recorded a further hat-trick around the turn as he went out in 29.

He will now move into the top 100 in the world.

“I can’t believe it,” Burmester said. “I’ve had an amazing summer and last week was a frustrating day for me on Sunday, but then my family and everyone who supported me said: ‘We’re coming up next week so you better win in front of us’ and I’m glad to have done that.

“I sharpened my teeth as a youngster on the Big Easy Tour here at home and I think I had five seconds in one year and then two years later I had four wins on the Sunshine Tour.”